Disney Wiki
Register
Don't have an account?
Sign In
Advertisement
in: Article of the week, Character groups, Kids,
and 15 more

The Sugar Rush Racers are a group of characters in Disney's 2012 animated feature film, Wreck-It Ralph and its 2018 sequel, who reside in the candy kart-racing video game, Sugar Rush.

Altogether, there are 15 official racers, although only 11 racers are the main characters of the Sugar Rush franchise. All of the racers share the same child-like proportions, in which their heads take up a 1:3 ratio of their height, and have large, anime-style eyes. The racers all have small jellybean-like noses, four fingers on their hands, and stocky, rounded features to emphasize their childishness. Additionally, each racer has his or her own candy motif.

Immediately after Sugar Rush was plugged in, and before anyone had played it, the game was hijacked by Turbo, who instilled himself as ruler under the alias, King Candy. King Candy locked away the racers' memories and manipulated them into turning against their true leader, Princess Vanellope. According to King Candy, Sugar Rush would be unplugged should Vanellope race because she's a glitch. The racers took this as a reason to shun and oppress Vanellope, and did just that for fifteen years before finally regaining their memories following King Candy's death.

Not counting Vanellope or King Candy, the racers are led by Taffyta Muttonfudge, and act very much like a cliquey biker gang. During the events of Ralph Breaks the Internet, the racers are adopted by Sergeant Calhoun and Fix-It Felix Jr., whose parenting radically alters their personalities to be more kind. 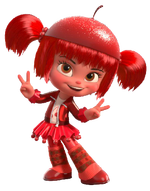 One look at her racing car and it's obvious that Jubileena Bing-Bing is as sweet as a cherry pie. Her cheerful smile and her enthusiasm are really contagious. Despite being one of the best racers of Sugar Rush, she doesn't always aim for the finish line. Winning is nice, but in the end, the only thing that really matters is love! She is voiced by Josie Trinidad. Her signature kart is the Cherriot. Jubileena's candy motif appears to be based on cherry confectionery. In the concept art, her original name was "Jubeelina Bing". 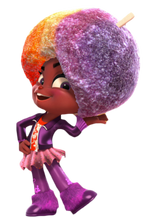 A Sugar Rush racer with some serious style, Snowanna Rainbeau is a vivacious young spirit with a personality as loud and colorful as her hairdo. With a boogying beat in her soul, she's as cool as ice! "Watch out racers, she'll lay down a funky track with her chilling charm and you'll never see it coming!" Snowanna's theme appears to be based around snow cones and sorbet. Her go-kart signature is the Fro Cone. 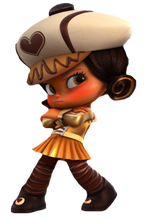 With the exterior of a polished piece of peppermint, Crumbelina DiCaramello is the poshest racer in Sugar Rush. But when it comes to racing, extravagance and wealth don’t distract DiCaramello; She considers herself a down-and-dirty racer. Crumbelina's theme appears to be based on various Italian desserts, including cannoli and tiramisu. Her racing kart is the Tira-Missile. In the film's climax, Crumbelina's racing kart was used by Vanellope in her rescue of Ralph. According to a grandstand model, "Crumbelina Drizzlecap" is her beta name. 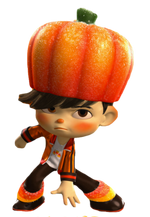 Round-faced little hooligan Gloyd Orangeboar loves nothing more than candy, candy, candy! Fortunately for him, Sugar Rush has plenty to choose from and he enjoys it all. For this fast-racing prankster, every day is Halloween. Gloyd's theme is oriented around candy corn and mellowcreme pumpkins. His go-kart is the Kernel. In the concept art, Gloyd's original name was "Rumple". 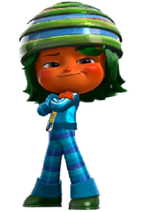 Swizzle "The Swizz" Malarkey: The Spice of Sugar Rush

Lover of adrenaline, Swizzle "The Swizz" Malarkey thinks that life must be lived to the last breath. There is nothing he can't defy, no stunt he can't perform or individual he can't beat. His racing is fast and elegant, just like his philosophy of life. Swizzle's candy theme is based on unicorn pops. His go-kart is the Tongue Twister. On a trivia note: his orange skin and green hair are a reference to the Oompa-Loompas from Wonka and the Chocolate Factory. According to a grandstand model, his original name was "Merfus".

Minty Zaki, the queen of the ice cream set in jewel, always has an ace up her tasty sleeve, especially when it comes to racing. Refreshing and full of resources, Minty Zaki is a defender of good causes, but for the wrong reasons. Minty's candy theme appears to be based on mints and candied apples, as opposed to an actual minty theme. Her go-kart is the Veloci-Wrapper. Minty Zaki's name pays homage to renowned Japanese animator Hayao Miyazaki. In the concept art, her original name was "Emmareld". 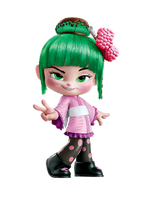 With the release of the movie in Japan, Minty received a completely new design, known as Minty Sakura. She's been given an overall Asian theme to her design, wearing Japanese pocky candy in her hair like that of stylized chopsticks. Originally believed to be a redesign of Candlehead until it was later discovered that both Candlehead and the new design appear together on the official Japanese poster for the movie. It was officially revealed that the new design belonged to Minty with the reveal of the official Japanese trailer on the Japanese game website 4Gamer. During the trailer, Minty's new design is shown alongside the racers when introduced; however, her original design later appears during the scene in which the other racers destroy Vanellope's scrap kart, so it appears there are some minor inconsistencies regarding this new design. When the racers are throwing their medals, Minty Sakura replaces Snowanna while the original Minty Zaki is still in the background. This also points out how Candlehead's name was was originally Minty because of Minty Sakura's similar outfit design. 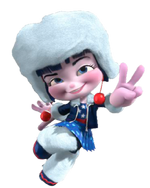 Adorabeezle Winterpop is the prettiest, happiest, most amiable ice champion of all time. She’s a racing and skiing fanatic who loves exploring new tracks hidden on the sugar-covered slopes of Sugar Rush. Adorabeezle has an ice pop and peppermint theme. Her go-kart is the Ice Rocket. She bears some resemblance to Popo and Nana the Ice Climbers. In the concept art, her original name was "Adorabella Winterpop".

In addition to the primary racers that are featured frequently, there are lesser known racers in the Sugar Rush world that are simply recolors of some of the main racers. They aren't playable in the browser-based version of the game, however. These racers' names can be seen on the jumbotron in the background of some of the Sugar Rush scenes.

In the original movie, the racers are first seen wrapping up a day of racing as the arcade comes to a close. King Candy initiates the Random Roster Race, but before the race can takeoff, Vanellope is revealed to have hijacked her way into the lineup. Before she can be arrested, a taffy-covered Wreck-It Ralph charges onto the raceway and destroys nearly everything in his path. This forces the Random Roster Race to be postponed until King Candy's staff can repair the raceway. The racers, led by Taffyta, decided to destroy Vanellope's kart to keep her out of the race. When Jubileena knocks down Vanellope’s kart, she does not only laugh, but also makes fun of her by saying “Oh no! I g-g-g glitched too!”. Ralph then witnesses the cruelty and scares the racers away.

Later on, the Random Roster Race has finally begun. Vanellope arrives despite King Candy's attempt to stop her, and she quickly bypasses the competition, including Taffyta, Candlehead and Rancis.

Before the race is over, Cy-Bugs invade Sugar Rush, forcing the racers to evacuate. They return after the threat is defeated by Ralph. When Vanellope crosses the finish line, the racers remember that she is their princess, and immediately apologize for their actions. Vanellope jokingly sentences her former tormentors to death, but quickly reveals to have been kidding. The racers then re-welcome Vanellope back into their circle.

In the six years since the defeat of King Candy, Vanellope has become a regular racer among the selectable cast. However, due to her popularity, this has caused Taffyta to again grow hostile towards her, and they develop a new rivalry. Due to Ralph's attempts to modify the game to make Vanellope happy, the Sugar Rush arcade cabinet breaks, forcing Mr. Litwak to unplug it. Now homeless, the racers (minus Citrusella, Sticky, Torvald and Nougetsia; whom appear to be absent from the film) are quickly adopted by Sergeant Calhoun and Fix-It Felix Jr., who soon discover parenting to be a greater task than either of them could have imagined when the children wreak havoc in their home.

At the end of the film when Ralph returns to the arcade, Sugar Rush has been restored and the Racers have returned to their game. Their brief time under Calhoun and Felix's parentage, however, has changed their personalities for the better, giving them all kinder dispositions.

The racers' likeness is featured in the Vanellope's Sweets and Treats cabana aboard the Disney Dream.

The Disney Wiki has a collection of images and media related to Sugar Rush Racers.