Slender Man
No Face from Spirited Away

“You must trick-or-treat or die.”
―Summerween Trickster

The Summerween Trickster is a humanoid monster with a yellow jack-o-lantern mask from Gravity Falls. He is the main antagonist of his debut episode, "Summerween", in which he threatens to eat Dipper, Mabel, Grenda, Candy, and the other kids of Gravity Falls if they do not obtain 500 candies in order to meet his quota for the night.

The Summerween Trickster is made up entirely of candy, hidden beneath layers of patchwork clothing. He is an unusually tall figure, first seen disguised in a yellow jack-o-lantern mask, a crumpled hat, and a brown coat. He is able to grow an extra pair of arms and extend them to grasp his victims. In his second form, he appears to be more malformed, crawling on four legs and extending his body to a certain length. His true form is an amorphous purple cluster of candy, with specific pieces forming his true face: he has two mints for eyes, two rolls of candy for eyebrows, licorice outlining a mouth, and candy corn for teeth.

The Summerween Trickster is an incredibly agile and flexible creature, able to move both on two legs and all fours with spider-like movements. It is also quite strong, able to lift people with a single hand and tear off car doors with relatively little effort.

As a sentient mass of candy, he can also reform if smashed to pieces, change his shape, and swallow an entire person. The Trickster also seems to possess other, more paranormal powers, such as being able to light a jack-o'-melon with a fingertip, cause lights to flicker and sudden, chilling winds to occur.

The Summerween Trickster first appears by spying on Dipper as he discards rejected "loser" candy from a nearby bush during Summerween. He approaches the Mystery Shack and is met by Dipper and Mabel at the front door, the former insulting the monster before it enters. The Trickster threatens to devour Dipper, Mabel, Grenda, and Candy if they are unable to acquire 500 pieces of candy by the time of the last jack-o-melon burning out and uses a trick-or-treater named Gorney as an example by swallowing him whole while shouting to the others to "Remember me!"; he then crawls over the roof out of sight. While Dipper refuses to wear a costume and they get only one piece of candy, the Trickster reappears and frightens the gang.

The kids eventually obtain enough pieces of candy, but when Dipper accidentally pushes the candy supply into a river, the Summerween Trickster confronts the children, upset to discover that the candy had been lost. Before he can devour the children, the Trickster is run over by Soos in a pickup truck who rescues the kids. However, the monster reforms into a hideous new form and chases after them.

Eventually, the gang crash into the Summerween Superstore and hideaway as the monster begins to search for them. While trying to escape, Soos tries out an electronic laughing skull, alerting the Trickster, who then devours Soos. The kids begin to use costume weapons to attack the monster, but the Trickster then grabs the children and explains that he was made from discarded candies the teenagers dumped and planned to seek revenge from all the "loser" candy that had been ignored and discarded by the children of Gravity Falls. As it is about to eat the kids, Soos then emerges from the monster, bursting out from its body eating the beast's candy innards, Gorney resurfacing a moment later. The monster then cries in joy after finally being viewed as delicious candies while Soos happily eats him.

The Trickster crying Tears of Joy as He's being eaten 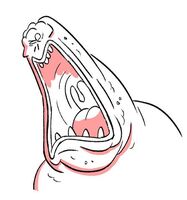 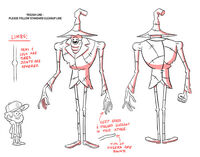 A model sheet for the Trickster, showing his height compared to Dipper's. 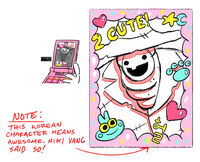