The Sun Bonnets (Bunny, Bubbles, and Beulah) are the babies of the Country Bear Jamboree. They began singing in Public School 821 in Clint, Texas, in Miss Grizzly’s class. From there they appeared five weeks running on Major Bear’s Amateur Hour and were booked into Walt Disney World. Backstage they study their lessons (all the cast helps them with their homework, but they get good grades, anyway). In their spare time they are all knitting a scarf for Big Albert, which they hope to have finished for Christmas—three years from now!

The Sun Bonnets are part of this revue show.

Posters for, "Bunny, Bubbles, and Beulah's Beautiful Bonnets" are hung along this trail in the fictitious town of Disney Springs. The poster features one of the girls' silhouettes and state that the brand creates bonnets in the sunshine state.

The Sun Bonnets in the Country Bear Christmas Special.

The Sun Bonnets in the Country Bear Vacation Hoedown. 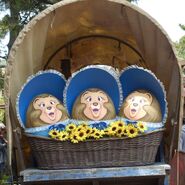 The Sun Bonnets as easter eggs at Tokyo Disneyland