As Told by Emoji

The Sun Chaser is a plane that Launchpad McQuack flies in "Launchpad's First Crash" of DuckTales. In the 2017 reboot series, The Sun Chaser is a huge red twin engine seaplane owned by Scrooge McDuck and now has a rear cargo compartment.[1] In the episode "Raiders of the Doomsday Vault!", it is revealed that Della Duck used to pilot this plane, which was once known as the Cloudslayer.

The Sun Chaser in the reboot series 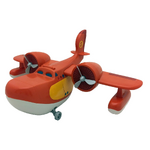 Retrieved from "https://disney.fandom.com/wiki/Sun_Chaser?oldid=4008620"
Community content is available under CC-BY-SA unless otherwise noted.