The Super-Adaptoid was created by Stan Lee, Jack Kirby, and Gene Colan.

Mimicry: The Adaptoid can copy the powers, appearance, and equipment of any superpowered being in close proximity to it. It then becomes a duplicate of that being, visually indistinguishable from it. Given the opportunity, it can copy up to eight different beings at one time, combining their attributes in a seemingly random fashion, but all these attributes turn green. The main picture, for instance, shows the Adaptoid with Captain America's shield, Thor's chest medallions, and Iron Man's ribbed armor.

In this series, the Super-Adaptoid is created by Justin Hammer.  He first was destroyed by the Avengers team easly, but was able to adapt and gain each of there powers.  Super-Adaptoid later served as a battle suit for M.O.D.O.K. as part of the Red Skull's league of villains, and later a proxy form for Ultron's corruption towards other machines. 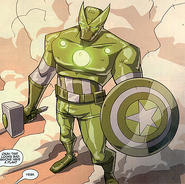