"Super Adventure!" is the sixth episode of the fourth season of Mickey Mouse Clubhouse, which aired on Disney Junior on October 18, 2013.

Professor Von Drake uses a machine he invented to turn the Clubhouse Gang into Clubhouse Heroes after Mickey discovers a villain named Megamort. 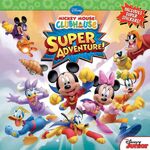 Cover to the book adaptation.

Mickey and friends after transforming to superheroes.

Mortimer in the Clubhouse.

The Clubhouse heroes after Mickey and Pete are reverted to their original sizes.

Mickey telling Mortimer to do the Hot Dog Dance.

Pluto telling Minnie about Mickey, who was shrunk by Megamort