Star Wars: Attack Of The Clones
Star Wars: Revenge Of The Sith
Star Wars: The Rise of Skywalker (legs only)

B2 Super Battle Droids are a series of battle droids used extensively by the Confederacy Of Independent Systems in the Star Wars franchise.

Super Battle Droids are an upgraded version of the B1 Battle Droid, created by the Baktoid Combat Automata, an offshoot of the Techno Union. Known improvements include thicker armor plating and built in wrist blasters, other variants had built in rocket launchers. In addition to the upgraded B1 battle droids, they also didn’t required a command system to operate, giving them limited independence. They were also much stronger than their predecessors, able to swat B1s away and lift Clone Troopers off the ground with ease. However, their limited independence was a shortcoming, as it couldn't allow the droids to formulate strategies. Because of this, they forced to relay on organic commanders or tactical droids to operate effectively.

Star Wars: Attack Of The Clones

The Super Battle Droids first appear when Mace Windu confront Count Dooku, the Fetts, and the Separatists on the balcony overlooking the area. The Supers then start blasting Mace off the balcony into, where more droids joining in the fight. Eventually the droids corner the Jedi and Count Dooku offers them to join him but when Mace refuses he orders his droids to kill them all. But the Jedi are saved when Grand Master Yoda and the army of Clone Troopers appear and destroy almost all the surrounding droids. Then the Battle of Geonosis begins with Super Battle Droids among the forces fighting the Clones and Jedi, until they're all forced to retreat. 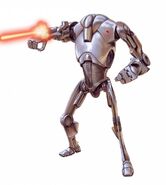 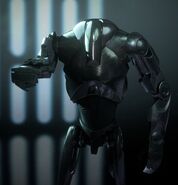 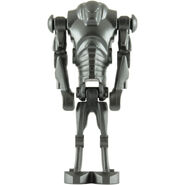