Super Daisy has been featured in Italian Disney comics since the early 70s. She was created by Guido Martina and Giorgio Cavazzano as a female counterpart of The Duck Avenger.

Super Daisy made her debut in "Paperinika and Ariadne's thread" (1973). In the comic, Uncle Scrooge calls Donald to the Money Bin to receive a top-secret assignment, but refuses to reveal the task while Daisy is present, belittling her for being a woman. Angry and repulsed by Uncle Scrooge's remark, Daisy recounts the story to Genialina Edy Son, who proposes that Daisy become the masked champion of the fairer sex.

Super Daisy has no superpowers, but is aided by the gadgets created by Genialina Edy Son, a protege of Gyro Gearloose. 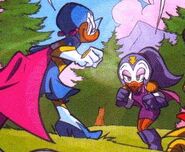 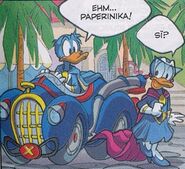