Gilbert in red jumpsuit and a blue cape, black hat

His eyes
His hands
Super Gilly is Gilbert Goof's superhero alter ego. He gets his powers by eating Super Goobers (peanuts), just like his uncle Goofy does to become Super Goof.

He appears for the first time in the history of Super Goof: untwists the twisters and tames the Wild West by Paul Murry (1966), published in Italy on the Mickey Mouse No. 595 in April 1967 with the title Super Goof and the Tornado, where Gilbert, grandson of genius Goofy accidentally found the secret identity of his uncle. In spite of himself then becomes the assistant of Super Goof, he also acquiring super-powers, thanks to the super peanuts. It is part of the club of superheroes and, thanks to his intelligence out of the ordinary, Super Gilly has always contributed decisively to the defeat of many criminals. 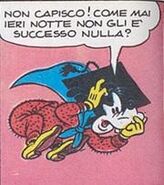 Add a photo to this gallery
Retrieved from "https://disney.fandom.com/wiki/Super_Gilly?oldid=4082382"
Community content is available under CC-BY-SA unless otherwise noted.