Disney Wiki
Register
Don't have an account?
Sign In
Advertisement
in: Article of the week, Characters, Alternate Forms,
and 23 more

Super Gilly (nephew)
Super Goof is Goofy's superhero alter ego. His powers are similar to those of Superman.

Whenever Goofy eats Super Goobers (peanuts), he gains incredible powers and assumes the identity of Super Goof, a heroic (albeit, still very clumsy) version of himself. His costume consists solely of a red union suit and a blue cape (which appear out of seemingly nowhere whenever Goofy eats a goober and change back to his regular clothes when the powers wear off). Humorously, despite the fact that Super Goof does not wear a mask, few can actually tell that Goofy and Super Goof are the same person, a likely parody of Superman's poor yet effective means to conceal his identity. Super Goof's secret identity is known only to his nephew Gilbert, who also calls himself Super Gilly on occasion. As Super Goof, Goofy's rogues consisted of classic Disney antagonists such as the Phantom Blot, Pete, and Emil Eagle.

Comic relief in the stories would spring from the fact that Super Goof's powers would "wear off" at the least opportune moments, such as when he was flying or in need of super strength. Goofy always kept a few Super Goobers in his hat, but would occasionally forget to restock, leading to situations in which he would have to get out of trouble without the super powers. In a crossover story, Huey, Dewey, and Louie found a Super Goober plant sprouted by a dropped goober, and "borrowed" Super Goof's powers; after doing a round of super deeds, the ducks' powers faded, and they had to be rescued by the Junior Woodchucks.

Super Goof first appeared in The Phantom Blot #2 (February 1965) by Del Connell (story) and Paul Murry (art), where he was just imagining that he was a superhero. He made his first appearance as an actual superhero in Donald Duck #102 (July 1965), in the story "All's Well that Ends Awful", also by Connell and Murry. In his third appearance, "The Thief of Zanzipar" from Super Goof #1 (October 1965), the origin of his powers is meteor-irradiated peanuts. In later stories, Super Goof not only encountered the Phantom Blot, but also such adversaries as Black Pete, the Beagle Boys, Emil Eagle, and Mad Madam Mim.

Super Goof had his own comic book series from 1965 to 1984 with a 74-issue run from Gold Key Comics. Reprints appeared in Walt Disney Comics Digest, one of the Dynabrite deluxe comics issued by Western in the late 1970s, and Disney Comic Album #8 (1990) from Disney Comics. The first release in the German-language Heimliche Helden book series by Ehapa published Oct. 2005 was devoted to Super Goof. Gemstone reprinted a story drawn by Jack Bradbury for the Studio Program as a backup in their 2006 release Return of the Blotman, although not in the original version, a rescripting having been handled by longtime Super Goof fan Joe Torcivia.

Super Goof made his animated debut in the House of Mouse episode of the same name. Here, Goofy eats a bag of peanuts that have been mutated by a radioactive meteor. Upon eating them he transforms into a superhuman version of himself. He uses this new alias to woo Clarabelle Cow so that he may go to the movies with her. However, Goofy becomes frustrated at the fact that everyone enjoys Super Goof's presence far more than Goofy's. In anger, Goofy dumps the peanuts in a garbage dumpster and quits his Super Goof status. Soon enough, Mickey and the gang discover that a meteor is coming right to the House of Mouse and will most likely wipe out the entire city. According to Ludwig von Drake's calculations, the meteor would specifically land exactly where Clarabelle was standing. Goofy attempted to reclaim the peanuts from the dumpster, only for a garbage truck to collect them and turn into a superhero. Though amazed by what he saw, Goofy remembered that he had one last peanut under his hat. He finds it, eats it, and turns into Super Goof thus ridding the world of the meteor. Goof feels it is the perfect time to ask Clarabelle but she denies, saying with pure pride that she has a date with Goofy. At the show's finale, when Super Goof flies off and leaves a peanut shell behind, Mickey states that he mistakenly believes Super Goof's secret identity is Dumbo. Offended, Goofy stated that he may be goofy, but even he's not that stupid.

The character of Super Goof was first seen on the cover of Goofy's comic book in the episode Pete's Beach Blanket Luau. Later in the episode Goofy's Super Wish, Goofy reveals his dreams of becoming a super hero much like the character in his book. Mickey and the gang then use various creative ways to give Goofy "superpowers" such as using balloons to fly and Rollerblades to have super speed. In the end of the episode, Goofy uses these elements to save his friends from Clarabelle's muffin making machine when it goes berserk.

Later in the episode "Super Goof's Super Puzzles", Goofy puts his Super Goof role in good use again when the sly Puzzler Pete challenges Mickey, Minnie, and Goofy to a day of super puzzles.

In The Scariest Story Ever: A Mickey Mouse Halloween Spooktacular, Goofy dresses up as Super Goof for Halloween.

It's a Dog's Life with Bill Farmer

Goofy as Super Goof is shown in the title for the segment of the show entitled "Goofy's Hometown Heroes".

In Toontown Online, Goofy dresses up as Super Goof for Halloween celebrations. 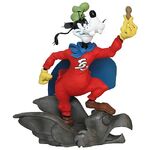 Super Goof as he appears in Toontown Online

Goofy dressed as Super Goof for Halloween in The Scariest Story Ever: A Mickey Mouse Halloween Spooktacular