Supers is a term for superheroes in the world of the Disney/Pixar The Incredibles franchise. In the films, each superhero has a random superpower. At the time of the first movie, all superheroes were forced into hiding when the public began to sue them for damages caused by crime-fighting. The Supers would be granted amnesty from responsibilities for past actions while, in return, they had to promise to never again resume any form of hero-work. Fifteen years later, however, Winston Deavor, CEO of DevTech, started off a campaign that would help Superheroes become legal again, which ultimately succeeded.

Over fifteen years, Syndrome had many Supers killed by Omnidroids during training sessions for Operation Kronos. The only known Supers left were Mr. Incredible, Elastigirl, and Frozone, with the exception of Bob and Helen's children and the "Wannabe" supers.

Aside from the Incredibles family and Frozone, several other Supers came cameo appearances in the film. During the opening, Dynaguy, Stratogale, Thunderhead, Meta-Man, and Gazerbeam, are seen attending Bob and Helen's wedding in their super suits. Dynaguy, Stratogale, Thunderhead, and Meta-Man are seen again flashbacks, along with Splashdown, when Edna Mode states the dangers of capes to Bob. Whilst snooping around Syndrome's base, Mr. Incredible broke into his computer and discovered a list of supers he killed during Omnidroid training sessions for Operation Kronos.

In the sequel, Superheroes were still illegal. However, Winston and Evelyn Deavor set out to change that by running a campaign that would make Superheroes legal again. Fitting tiny cameras into their super-suits, Supers could share their perceptions with the public, showing them what goes on when they are fighting crime. It is also revealed in the sequel that not all the Supers were killed by Syndrome. There were many others who were forced into hiding due to the law. Among these supers were the "Wannabes", Voyd, He-Lectrix, Reflux, Brick, Screech, and Krushauer, who joined Winston Deavor's campaign to bring Superheroes back. At the signing of the International Supers Accord, more Supers were seen among the many ambassadors attending the ceremony.

All the Supers that are seen or mentioned the films are playable characters in the LEGO video game. 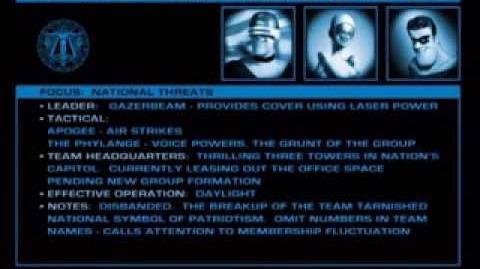 Zephyr
Add a photo to this gallery

Retrieved from "https://disney.fandom.com/wiki/Supers?oldid=3995027"
Community content is available under CC-BY-SA unless otherwise noted.