The Avengers: Earth's Mightiest Heroes
Hulk and the Agents of S.M.A.S.H.
Guardians of the Galaxy

The Supreme Intelligence is a character from Marvel Comics that appears as the overarching antagonist of Captain Marvel.

Before making an on-screen appearance in Captain Marvel, Supreme Intelligence was mentioned in Guardians of the Galaxy. The events of Captain Marvel have humbled it to some extent, even if it's not fully reformed, as it's signed a peace treaty with Xandar. Ronan rejecting this peace treaty is what kicks off the events of the movie, and ultimately leads to the formation of the titular Guardians of the Galaxy.

The Supreme Intelligence was created by Stan Lee and Jack Kirby. 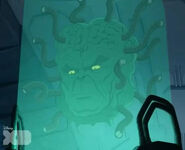