Suri is a young lemur and a supporting character from Disney's 2000 CGI film Dinosaur.

Suri is the most cheerful of the lemurs and eagerly wants to make new friends with the dinosaurs who lost their relatives, she is Plio's daughter, Yar's granddaughter and Zini's niece, she is also the most emotional when Lemur Island is destroyed by a rough meteor shower and kills all the unfortunate lemurs still on the island. When she feels upset (in case of her subjects' deaths) or frightened, she is usually consoled by Plio or Yar.

Suri first appears on Lemur Island where she and some lemur kids are chased by Aladar (raised from a baby Iguanodon), though it turns out to be just a game. Later after the mating ritual, Suri climbs up a tree to see a gentle meteor shower. Suddenly, a meteorite severely hits the ground, which causes a giant mushroom cloud to change color and the waves to push over along with the island shaking. She screams for help and her mother Plio takes her down safely. Plio then urges Aladar to run and he takes her, Yar, Suri, and Zini on his back, and they escape the island by jumping across the sea to the mainland. After the disaster on Lemur Island, Suri performs a crying call for all of the deceased lemurs, and Aladar bellows a similar mournful roar. She then weeps and her mother consoles her.

For the next few days, they wander through deserted lands until they find a dinosaur herd led by Kron, his second-in-command Bruton, and his younger sister Neera. Suri and the others learn that the herd is going to the Nesting Grounds. There, they befriend some of the elder dinosaurs: Baylene, Eema, and Url who are at the end of the herd because they are too old to follow the rhythm of the others. Plio is the first to notice that her son Aladar has fallen in love with Neera.

After several days of rough marching, Bruton (who had been attacked by Carnotaurs) informs Kron that Carnotaurs are following them so Kron decides to accelerate the pace, not caring if someone is left behind. Because of this, Aladar, the lemurs, Baylene, Eema, and Url separate from the herd. On a rainy night, they find shelter in a cave. They also find a wounded Bruton who has been banished from the herd by Kron. Despite the obvious, Aladar helps a reluctant Bruton into the cave. While Plio tends to Bruton's wounds, he asks her why she is giving them false hopes, but Plio reassures him that hope is the last thing that gets lost and that he is welcome to follow them. That night when two Carnotaurs attack them, everyone manages to escape deeper in the cave, but Bruton dies in the process while saving them, and the entrance of the cave is blocked by the falling rocks. Suri mourns over Bruton's death and is once again consoled by her grandfather Yar.

One early morning, Suri tries to ask some timid young Iguanodons to come out on the count of three. Aladar notices and manages to persuade them by convincing them that Suri is harmless. Later, after wandering for hours in the cave, Suri and Zini start smelling something. Plio and Yar smell the same thing, and so they start digging through the rocks to discover a ray of light; however, more rocks fall and cover the exit. Aladar screams in frustration and gives up, but Baylene says that they didn't come this far only to give up, and so everyone starts to push the rocks until they discover something amazing: they have arrived at the Nesting Grounds. Plio is happy that they have finally arrived at their new home, and she with Yar watch happily as Suri climbs up the tree and she, Zini, and Baylene jump into the lake. Aladar then goes to warn the rest of the herd about the cave entrance.

Months later, Aladar and Neera have babies of their own, and Suri happily joins the celebration as she watches a baby Iguanodon hatching out of its egg. 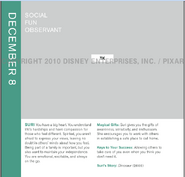 Crying for help after observing the disaster

Suri and her family

Retrieved from "https://disney.fandom.com/wiki/Suri?oldid=4556581"
Community content is available under CC-BY-SA unless otherwise noted.