This article is about the Marvel Comics supervillain. For the character from Atlantis: Milo's Return, see Surtr.

The Avengers: Earth's Mightiest Heroes
Avengers Assemble
What If...?

His plans being foiled

“I cannot die. Not until I fulfilled my destiny and lay wasted to your home.”
―Surtur[src]

Surtur is a demon and supervillain from Marvel Comics and the Marvel Cinematic Universe, being the lord of the Fire Demons from the extra-dimensional planes of Muspelheim. He is the one prophesied to bring the destruction of Asgard in the film Thor: Ragnarok.

This version of the mythological Surtur was created by Stan Lee and Jack Kirby.

Surtur is a violent villain who desires the destruction of all the Nine Realms through fire and depends on his minions and subordinates to do what he pleases. He has a no-nonsense attitude and acts infuriated when Thor refuses to take him seriously.

Surtur is a massive Fire Demon. His body is well-built and appears to have tremendous strength. His body is red and his hair is made of flames.

While Heimdall and Thor talked about the chaos that Loki has made to the Nine Realms, Heimdall feels that the seal of Bor's Sons was broken, he tells Thor that Odin must be informed about what just happened. After the Seal of Bor's Sons was broken, the fire demon lord escaped and burned Nidavellir to the stone and stole the shattered remains of the sword he sought. When the last Norne Atone was destroyed by Wonder Man, Amora was sent to Muspelheim. Here, she founds Surtur, who informs her that now she works for him.

Surtur then possessed Enchantress and attacked with his army the homeworld of Beta Ray Bill, Korbin. At the burning planet, he reforged the Twilight Sword. After the Enchantress was defeated by Thor and Bill, he cleared the forging of his sword. He later sent the Enchantress to free Loki and allow him to go on a rampage through the Destroyer as a distraction for the Avengers while "planting the seeds of destruction".

After Enchantress reports to Surtur, he then said that Ragnarok will descend and all will burn.

Thor was sent to Muspelheim when Nighthawk activated the contingency plan against Thor, during which a Norn Stone was attached to the God of Thunder's hammer, causing him to teleport through different realms, one of them being Muspelheim, where he saw Surtur. After being freed from the contingency plan by the Hulk, Thor mentioned that he flew through Muspelheim a total of 81 times. When the Bifrost was affected by the use of the Space Stone, Thor, Hulk, and Hawkeye were accidentally transported to Surtur's realm. They were extracted out of Muspelheim by Heimdall's portal shortly before falling on Surtur's grasp.

Two years after the war against Ultron, Thor's quest to find the Infinity Stones has been unsuccessful, and he has been captured and imprisoned by Surtur, who intends to fulfill the Norse apocalyptic prophecy of Ragnarok, by using the Eternal Flame beneath it to grow "as tall as a mountain" and bring forth the end of Asgard. He also informs Thor that Odin is no longer on Asgard, and that it will make the throne defenseless. However, Thor summons his hammer and overpowers Surtur, which makes him think he's prevented Ragnarok.

During the attack of the Revengers (led by Thor, Loki, Valkyrie, and Hulk) against Hela, Loki went inside of Odin's vault and got Surtur's crown. He later burned it on fire and was summoned into Surtur. Hela later attacked him until Asgard was destroyed. He retaliated and smashed her into oblivion, being consumed by the explosion of Asgard's foundation.

Surtur appears in the episode "What If... Thor Were an Only Child?". In a universe where Loki was never adopted, Surtur joins in on Thor's party on Earth. Surtur is shown flirting with the Statue of Liberty, but the heat from his body accidentally melts the torch arm off, so he awkwardly runs off. He is also seen trying to limbo underneath some power cables, but his crown accidentally gets caught in them, knocking the power out across the Western Seaboard. When Thor tells everyone Frigga is coming, Surtur is seen repairing the Statue of Liberty by welding its arm back on. 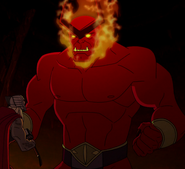 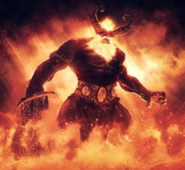