Anna Popplewell (younger)
Sophie Winkleman (older; The Lion, the Witch and the Wardrobe only)

Told that she is "trying to be smart", her siblings fighting

"Wars don't last forever, Lucy. We'll be home soon."
"Isn't it time you're in bed?"
"I'm just trying to be realistic!"
"Look, just because some man in a red coat hands you a sword it doesn't make you a hero!"
Susan Pevensie is the elder sister and the second eldest Pevensie child. She appears in as a child in The Lion, the Witch and the Wardrobe, Prince Caspian, and Voyage of the Dawn Treader, and as an adult in The Lion, the Witch and the Wardrobe. During her reign at the Narnian capital of Cair Paravel, she is known as Queen Susan the Gentle or Queen Susan of the Horn.

Susan is portrayed by actress Anna Popplewell. Actress Sophie Winkleman portrays an older Susan at the end of the first film.

Role in the film series

In The Lion, the Witch and the Wardrobe, Susan is the second eldest of the Pevensies after Peter. During World War II, Susan and her siblings were sent to the countryside to the house of Professor Digory Kirke. She and her brother Peter only discovered Narnia by chance when they stumbled into the wardrobe while trying to avoid Mrs Macready (the housekeeper of the house they were staying at). However, Lucy had been there twice (she told Peter and Susan but neither of them believed her) and Edmund had also been there at the same time Lucy was making her second visit (which he denied had ever happened). After the Pevensies travel to Mr.Tumnus' home and discovered he was captured by the White Witch's secret police, Susan suggested they return to the Wardrobe but Peter and Lucy suggested they stay. The siblings soon meet two beavers who tell them about the King of Narnia Aslan, they also tell the siblings about the prophecy of two sons of Adam and two daughters of Eve defeating the White Witch and restore peace to Narnia. While, the beavers were talking to the children, Edmund sneaked away to see the Witch. Susan, Peter and Lucy wanted to go after him, but the beavers tell them that only Aslan can save their brother and they would have to travel to him. The Witch's secret police were searching for them during the children's long travel. At one point, the beavers and siblings thought the Witch found them but it turned to really be Father Christmas, who says the Witch's powers are weakening. Father Christmas then give each of the three children gifts for battle. Father Christmas gives Susan a bow and arrows and a Susan's Horn to blow for aid. The children then tries to cross a frozen river but were ambushed by the Witch's wolves. Peter draws his sword at the captain Maugrim. Maugrim patronize Peter, but he was afraid. Peter then decided to make the girls hold on to him as they wash away in the river. The children realizes the snow was melting and spring was here. The children and the beavers finally reach Aslan's Camp and meet Aslan himself as a huge noble lion. The children explain what happened to Edmund and that they need his help. Susan and Lucy later frolick by a small river until they were ambushed by Maugrim and another wolf. Susan blows her horn for aid. She and Lucy then climb a tree with the wolves snapping at their feet. Peter comes to rescue the girls and was able to slay Maugrim. The second wolf ran away and Aslan ordered his troops to follow him to rescue Edmund. Aslan's troops returned Edmund safely to the siblings with Susan and Lucy welcoming him with opening arms. The Pevensies realized they have to stay to fight the Witch, and they decided to practice. Susan uses her bow and arrows to practice aim. The Witch comes to Aslan's Camp to take Edmund but later renounced her claim after Aslan secretly agrees to sacrifice himself. Together with her sister Lucy, she witnesses Aslan's death and resurrection on the Stone Table. Aslan takes the girls to the Witch's Castle to revive the stairs she turned to including Lucy's friend Mr. Tumnus. Aslan and the girls take the reinforcements to the battle. In the original novel, she was not allowed in battle, however in the 2005 movie she shot a dwarf who was trying to kill Edmund. After the battle, she is crowned to the Radiant Southern Sun as Queen of Narnia by Aslan, and shares the monarchy with her brothers Peter and Edmund and her sister Lucy. She later becomes known as Queen Susan the Gentle. The period of their reign is considered the Golden Age of Narnia. Throughout the book, Susan is the voice of caution and common sense, but is often too concerned with physical comfort. At the end, after a number of years in Narnia, she counsels against pursuing the White Stag, fearing the unknown transition she and her siblings all sense the pursuit might bring. Of all the Pevensies, Susan is the most content in positions of ease and comfort, and tends to advise the others to avoid anything unpleasant.

Susan's magical horn plays an important part in the adventures of Prince Caspian. The horn is an ancient relic given to Prince Caspian by his tutor, the half-dwarf magician Doctor Cornelius. When the Prince's life is threatened by King Miraz the Usurper, Caspian blows the horn and the Pevensies are magically transferred to Narnia from a railway station in England. Using the bow and arrows she has retrieved from the ruin of Cair Paravel, Susan proves her legendary prowess at archery by defeating Trumpkin the dwarf in a friendly competition. She is described as being enormously gentle and tender-hearted, being embarrassed to defeat the dwarf. Edmund, however, later describes her as "a wet blanket". She denounces Lucy's belief in Aslan's presence although she later admits to having known deep down that it was true. The siblings and Trumpkin meet Caspian in the forest, where he takes them to Aslan's How. Peter believes they should invade Miraz's Castle but Lucy and Caspian don't believe so. Edmund is sent in first and as soon as he gives the signal, Peter, Susan, and Caspian fly in on gryphons and take out some of the guards. Caspian then says that he wants to go a free his teacher that is locked away in the dungeons, Peter complies after Susan tells him that Caspian will still have time to get the gate open to let in the troops. But things don't go according to plan when Caspian finds out the truth about his father's death and he goes to Miraz's room to get some answers. The rest of the battle just goes downhill from there. More than half of the troops get killed and the rest head back to the How. Peter blames Caspian for the failure and Caspian blames Peter, this nearly ends in a sword fight between the two but they're stopped by Edmund. Susan later accompanies Lucy to find Aslan when the Telmarines arrived at the How for battle. But in the forest, the Telmarines followed the girls, Susan decided to send Lucy alone while she defeats the Telmarines and was later rescued by Caspian. Caspian and Susan returns to the How where Susan leads the archers in battle. Susan and the Narnians fight the Telmarines as hard as they can until the Dancing Trees (Who were revived by Aslan) help the Narnians as well as the River God. By the conclusion of Prince Caspian, Aslan says that she and Peter will never enter Narnia again because they have accomplished what they needed to there. In the 2008 film adaptation, Susan is seen in a brief scene (newly added for the film). Set in front of the Strand London train station before the children are drawn into Narnia by magic, Susan has an encounter with a boy who recognizes her and tries to chat her up. He comments on how he's seen her before and how she often sits alone. She replies that she likes being alone and gives the fake name "Phyllis" when the boy asks for it. Upon entering Narnia and meeting Prince Caspian, there is an obvious attraction to the prince and mutual flirtation ensues throughout the film, ending bittersweetly as Susan must leave Caspian and Narnia to return to Earth, but not before giving him a kiss and an embrace. Additionally, Susan has a more active role during the battle scene at the end of the story, being much more involved in the actual battle and is in charge of her own corp of archers. She demonstrates herself to be a capable combatant, slashing Telmarines with her arrows in between shooting them, as well as clubbing the Telmarines with her bow.

Susan does not go to Narnia, however, she is mentioned a couple of times and seen a few times. Lucy is convinced Susan is much prettier and sees her reflection in the mirror. She is seen writing a letter to Edmund and Lucy telling them about America and this boy who Susan thinks fancies her. She says she will be back soon.

Susan is the most sensible and serious child out of the Pevensies but can have a fun side. She's brave and is a great swimmer.

In the 2005 Disney film The Chronicles of Narnia: The Lion, the Witch and the Wardrobe, Susan is portrayed by British actress Anna Popplewell as a young girl and Sophie Winkleman as an adult. Popplewell reprised the role in the 2008 film The Chronicles of Narnia: Prince Caspian. Her role in the movies are similar to the book, playing a somewhat pessmistic and at times over protective character. However, Susan is portrayed as a warrior queen, whereas in the books it was stated that she did not care for battles. Susan also develops an attraction to Prince Caspian in the film, and gives him a kiss before she leaves Narnia; this had not been included in the book.

The Pevensie children in The Chronicles of Narnia: Prince Caspian

The Pevensie children with Trumpkin in The Chronicles of Narnia: Prince Caspian 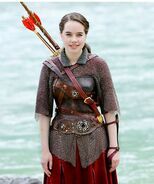 Retrieved from "https://disney.fandom.com/wiki/Susan_Pevensie?oldid=4068708"
Community content is available under CC-BY-SA unless otherwise noted.