Olivia, Alice, and Emily
Susan Sheridan (born as Susan Haydn Thomas) was a British actress and voice actress. She is best known for providing the voice of characters in BBC production shows/radio, such as Noddy in Noddy's Toyland Adventures, Princess Sylvia in Muzzy in Gondoland, and Trillian in the BBC radio series The Hitchhiker's Guide to the Galaxy.

Her only known Disney roles are Princess Eilonwy in Disney's 1985 animated film, The Black Cauldron and Christopher Robin in Disney's 1986 video game, Winnie the Pooh in the Hundred Acre Wood. 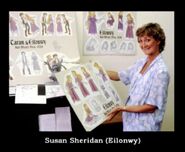 Susan Sheridan with Noddy
Add a photo to this gallery

Retrieved from "https://disney.fandom.com/wiki/Susan_Sheridan?oldid=3976810"
Community content is available under CC-BY-SA unless otherwise noted.