Susan "Susie" Essman is an American actress, voice actress, and comedian. She is best known for her role as Susie Green on Curb Your Enthusiasm.

For Disney, she provided the voice for Mittens the cat in the 2008 Disney animated feature film, Bolt. She also voiced Sadie from Kim Possible. She even played Donna in the ABC TV show, Bless This Mess. 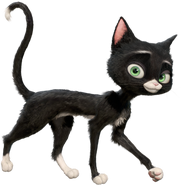 Sadie
(Kim Possible)
Add a photo to this gallery

Susie Essman behind the scenes of Bolt.

Susie Essman at premiere of Bolt in November 2008.

Susie Essman speaks at the Curb Your Enthusiasm panel at the 2017 Summer TCA Tour.
Add a photo to this gallery
Retrieved from "https://disney.fandom.com/wiki/Susie_Essman?oldid=4150816"
Community content is available under CC-BY-SA unless otherwise noted.