Blue eyes for her windshield

Restores and revives to a brand new hotrod
Susie is a little blue car and a main character from the animated short of the same name.

Susie is a small blue coupe on display in a dealer showroom who is bought by a well-to-do man who is taken with her. Thrust into high-society, she finds herself surrounded by much larger, more luxurious cars but eventually makes do. She is pampered, but time takes its toll on her, mechanically and cosmetically; eventually, her owner trades her in. A second man buys her but her new life is much less pampered, being left outside in the cold and being poorly maintained. One night, she is stolen, chased by the police and totaled in the resulting wreck. Rotting in a junkyard, all looks hopeless for Susie when a young man notices her, buys her, and with the help of his friends, completely restores and revives her into a brand new hotrod.

Susie made a cameo appearance in an episode of the House of Mouse called, "Max's New Car". She's seen out in the parking lot parked between a pair of Light Cycles from TRON, and Herbie. She is also restored to how she looked throughout the short rather tan as a hotrod at the end. 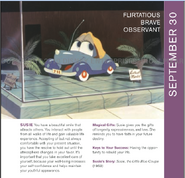 Restores and revives to a brand new hotrod
Add a photo to this gallery
Retrieved from "https://disney.fandom.com/wiki/Susie_the_Little_Blue_Coupe_(character)?oldid=3602589"
Community content is available under CC-BY-SA unless otherwise noted.