To have her brother all to herself

Jeremy not giving her attention

"I am, and always will be Jeremy's favorite girl!"

Suzy Johnson, known as Little Suzy Johnson[3] by her neighbors, is a recurring antagonist of the popular TV show, Phineas and Ferb. She is the little sister of Jeremy and the daughter of Jack and Mrs. Johnson. She has a high-pitched squeaky voice and appears very cute and innocent; however, she is actually very manipulative and spoiled, always having to get her own way and will do anything to keep Candace away from her brother, as she sees Candace as a rival for Jeremy's time and affection. Due to comments given by Buford to Phineas and Isabella, it can be assumed she terrorizes him as well as Candace.

Suzy, when around Jeremy and most people she feels non-threatened by, acts very kind, sweet, and innocent. When around others whom she does feel threatened by, however, usually when threatened, she acts very malicious and cruel. An example of this kind of behavior is to Candace, whom she feels threatens her relationship with her brother. She, therefore, has taken measures, such as putting squirrels in her pants and training her dog to torment her.

Due to this attitude around others, some neighborhood kids tend to fear her, evident in Buford Van Stomm's mortal fear in her. He goes so far, due to her apparent behavior towards him, as to call her "the face of evil." It appears, though, that she only acts this way around people she is threatened by, either physically or relationship with her brother wise.

As well as this, a reason for her hatred and cruelty toward Candace might simply be a need for attachment. It is common that a younger sibling to become so attached to their brother or sister that they are afraid of any possibility of separation from them. She shows this possibility by acting very loving towards her brother, even being held in his arms.

Suzy as well as a much higher intelligence than most children of her age, evident through a large vocabulary and understanding of the actual psychosis she saw from Candace. She still tries to maintain a somewhat mindless and oblivious way of though when Jeremy is around.

Suzy is a little girl.

As a small child, Suzy felt her attachment to her brother became threatened when receiving a call from Candace. Candace said she wanted to talk to her mom, but Suzy knew this wasn't the full truth. Suzy knew that Candace "just wanted to talk to Jeremy" and that Candace had a crush on him. So, she attempted to scare Candace off via the phone, informing her to not pull anything on him and that she was, "and always will be Jeremy's favorite girl." When Candace came over later, she used a remote-control truck to attack Candace, driving her into the mud and then sent her poodle on Candace. Candace ran off. Later, however, after Candace "developed" the hiccups, Jeremy took her to get some water, and she snarled at Suzy, and Suzy was left still angry and also confused. ("One Good Scare Ought to Do It!")

While skating in the park with her grandmother and brother sometime later, Suzy encountered Candace again, this time being informed that the three would be racing Candace's grandma, Betty Jo Flynn, in a rematch derby. Originally, the three were going to race Betty Joe and Candace's brothers (Phineas and Ferb), but Suzy manipulated Candace to race by using her "cuteness" so she could further torment her, so she replaced Phineas, who became a commenter instead alongside Grandpa.

When the race began, Suzy's grandma had a rocketing neck-to-neck start with Betty Joe, while Suzy stayed at a good pace. Noticing that Candace and Jeremy were getting close to each other, Suzy attempted to break them up, darting past her and causing Candace to spin out of control, but Candace landed in Jeremy's arms instead. The team set up to pull a whip, sending Jeremy forward, now neck-to-neck with Candace. Suzy activated the rockets she added to Candace's skates beforehand, and instead sent Candace rocketing backward along with Jeremy, pummeling into her and Ferb. At the end of the race, there was a minor dispute about who won, but both grandmothers realized that the time spent with the kids was more important than winning. ("Crack That Whip")

Picnic in the park

She and Jeremy later went on a picnic and to play croquet in the park. Suzy did not know that Candace would be accompanying them. When she found out, at the park she took the advantage, starting the croquet game and sent a ball flying at the pie Candace was holding, splatting it all over her face. As Jeremy went for napkins, Suzy told Candace again that the favorite girl was her. When he returned, and Candace cleaned herself up, Suzy gave her a shaken soda can, splashing her when it was opened.

After Candace cleaned up again, the three went for a walk, and Suzy took a nut from an elderly woman and sent it flying into Candace's pants as Jeremy went away briefly. Squirrels then went after the nut and into Candace's pants, causing her to go off freaking out. Later while stopping for ice cream, Suzy caused Candace to slip and fly into the ice cream vendor's cart and down a set of stairs. Suzy finally scared Candace off by putting a squirrel in her face. At Candace's backyard comet party later that day, Suzy attempted to hit Candace with a ball while she was holding Jeremy's hand, but was stopped by a mound of steaks that fell on her ("Comet Kermillian").

Another time, Jeremy called Candace, asking her to babysit Suzy. Candace absentmindedly agrees, but by the time she realized what she was doing, it was too late, and Jeremy had hung up. Candace tries to get her mom to help, but she doesn't believe Candace when she says Suzy is evil. Fearing the worst, Candace gets rid of anything dangerous in the house, (including the knives in the kitchen, their microwave, their blender, and even her old teddy bear) and wears a large, protective foam suit before Jeremy and Suzy arrive. Once there, Suzy suggests making paper dolls, leaving Candace confused. She explains that she only tortures Candace to control Jeremy, and that when Jeremy is not around, she is "off the clock."

Once hearing that Candace cannot manipulate her brothers, she decides to help Candace in busting them for making a replica of Niagara Falls. She begins by demonstrating to Candace how to do it by getting some lemonade, to which Candace remarks, "I have so much to learn." She then motivates her and suggests that she get her brothers to bust themselves. Candace succeeds in getting Phineas to call their mom, but as usual, their project disappears before their mom gets home. Candace asks Suzy if she has anything else to say, to which she replies, "Results may vary." In the end, Jeremy comes to pick up Suzy, who asks Candace to hold a hose up to her face. Suzy turns the hose on, spraying Candace in the face and causing her to sigh and say, "Guess we're back on the clock," while Suzy innocently laughs and cries, "Splishy Splashy!" ("Suddenly Suzy")

At the Science Fiction and Fantasy Convention

Suzy is later seen at the Fantasy and Science Fiction Convention with her brother getting her face painted while Jeremy talked to Stacy on his cell phone. Later, she chases Candace twice while she's dressed as Ducky MoMo. She wanders into an exhibit called Alien Nest and isn't seen again until near the end of the episode. After Candace reveals herself, Suzy hugs her saying "I love you, Ducky MoMo.", to which Candace replies "Ducky MoMo loves you too, Suzy." This is the only time that Suzy does not act childish as a cover-up from Jeremy. ("Nerds of a Feather")

While Suzy was away at a friend's house for the day, Suzy's poodle continued Suzy's mission to torment Candace, biting her and peeing on her as she was over at Jeremy's for a "date". Likely, when she returned home, Suzy was very pleased. ("Interview With a Platypus")

It is not known why Suzy fought Meap at a Bango-Ru convention, for that scene was removed from the episode, for unknown reasons. ("Meapless in Seattle ").

It is not so common for a younger sibling to hang on to a far older sibling for attention. However, it is implied that she doesn't love Jeremy and only cares for the perks of her possession as little sister. ("Suddenly Suzy")

While Suzy may only hang around Jeremy for perks, she does seem to generally admire her grandmother. She has shown affection around her twice during "Crack That Whip" and "Run, Candace, Run" both times she has shown genuine affection towards her, the latter actually hugging her grandmother. Since Hildegard asked Suzy to compete against the Flynn-Fletchers, it is implied that she is at least somewhat aware of her granddaughter's darker persona. They also share a common hatred/rivalry towards someone in the Flynn-Fletcher Family (both from the Flynn side), Hildegard against Betty Joe, and Suzy against Candace.

The two have never met on screen, but they are of the same family. Annabelle wandered off before Suzy was born, so it is unlikely that the two were even aware of the other's existence until Candace reunited Annabelle to the Johnson Family.

Unlike most of her family (Save for maybe her grandmother) Suzy seems to care a lot about her beloved pet poodle, she might have used some of her more darker tactics to train her, but sense the Poodle seems to love Suzy this seems unlikely. It is unknown if the Poodle obeys Suzy out of Love, Respect or Fear.

Suzy has not been seen interacting with her parents, but it is safe to assume that they are unaware of her darker personality.

Candace has grown to fear and loath Suzy. Suzy feels threatened by Candace being Jeremy's girlfriend, and has taken it upon herself to embarrass Candace in front of Jeremy whenever she is "on the clock". She also went as far as to train her poodle to torment her (i.e. using her shoes as a bathroom, and flushing her shoes down the toilet) ("Interview With a Platypus"). However, she also helps Candace in busting her brothers when she's "off the clock" ("Suddenly Suzy"). They also have a common interest, Ducky Momo.

Suzy is Buford biggest fear (He concerned his fear of giant squids in "Voyage to the Bottom of Buford"). He describes her as the 'Face of Evil'. Suzy might intimidate him over the fact that he is stronger than she is at the moment.

Isabella was confused about Buford's statement of the "Face of Evil", suggesting she is unaware of Suzy's dark personality ("One Good Scare Ought to Do It!"). Isabella did get slightly annoyed when Suzy said "Whatcha doin?" ("Suddenly Suzy").

They have not been seen interacting.

It is likely Suzy likes Norm as she was able to play with him while Jeremy Johnson tried to find him, be he didn't. ("Ferb TV")

The few times Suzy is nice to Candace 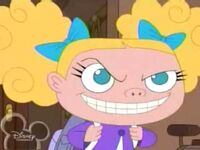 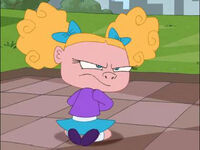 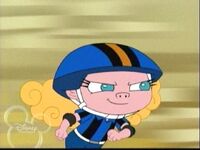 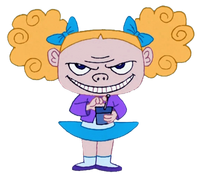 Retrieved from "https://disney.fandom.com/wiki/Suzy_Johnson?oldid=4236611"
Community content is available under CC-BY-SA unless otherwise noted.