Being scammed by his own victims

“Give you? No! Giving's bad for business! But I'll sell you some for a price.”
―Swamp Rat

Swamp Rat is a sewer rat in 101 Dalmatians: The Series. He is a shady used-goods dealer and con artist who speaks with a Southern accent.

Swamp Rat is one of the many creatures that live in the swamp that borders the Dearly Farm; though unlike many of the swamp's other creatures, he has taken a keen interest in the outside world and he often attempts to barter with other individuals in order to acquire strange and unusual objects that come from civilization. It is for this reason that Swamp Rat has become a close acquaintance to many of the individuals in the Dearly Farm, including the Dearly's Dalmatians. If they ever need to purchase something, they can usually acquire it at his store, for a very steep price. However, Swamp Rat isn't picky about what people give him in exchange for his objects, as he'll take anything, including chicken feathers, dog collars, dog dishes and even other animals. What he does with the objects he acquires is uncertain, though it seems he more than likely sells the objects to other animals in exchange for different objects, in which he adds anything he specifically wants to his personal collection, as was demonstrated in several episodes of the series.

Swamp Rat's ethics are highly questionable, and he isn't afraid of tricking other people into making a bad deal. He has a bad reputation for trying to con others into giving up their valuables and he often manipulates people into actually helping him do his dirty work, which is why Steven and Cydne serve as his henchmen. There have also been instances where Swamp Rat will take over a building in order to throw a party, in which all of the guests are forced to pay an admission fee, which is just another example of how Swamp Rat's store has continued to thrive, despite being in the middle of the swamp. However, there is little that Lieutenant Pug can do in order to stop Swamp Rat, as since Swamp Rat is a creature of means, he has a larger influence in many of the events on the Dearly Farm than most people realize. Despite the fact that he knows people don't like him, Swamp Rat continues to do what he does as he realizes he's untouchable, for as long as he holds a monopoly in regards to his store, the animals who dislike him will be forced to come to him when they need to acquire something.

Swamp Rat with Steven and Cydne 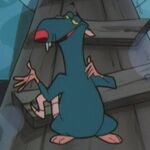 Swamp Rat tries to make a deal with Lucky

Swamp Rat tries to make a deal with Lucky