English
Swiss Family Robinson is a 1960 feature film starring John Mills, Dorothy McGuire, and Sessue Hayakawa in a tale of a shipwrecked family building an island home. It was loosely based upon the 1812 novel Der Schweizerische Robinson (literally, The Swiss Robinson) by Johann David Wyss. It was directed by Ken Annakin and shot in Tobago and Pinewood Studios outside London.

It was one of the rare widescreen Disney films shot with Panavision lenses. When shooting in widescreen, Disney had nearly always used a matted widescreen or filmed it in Cinemascope.

The Robinson family, on their way to New Guinea, is chased by pirates into a storm. The captain and crew abandon the ship leaving the Robinsons shipwrecked off an uninhabited island. William (John Mills) and his oldest and middle sons, Fritz (James MacArthur), and Ernst (Tommy Kirk) salvage as much as they can from the wreck including livestock, tools, and even an organ. As they gather what can be removed from the ship, the pirates return and begin shooting at it. Fritz and Ernst begin readying its cannon, but they only have one shot. Suddenly, the pirates turn around; Father has put up a flag which sacred the pirates off. When the boys ask, Father remembered studying vexilology, and that the flag was phonetic for India, indicating the ship is under quarantine and that there is Black Death aboard. The three men construct a treehouse home on the island while the youngest son, Francis (Kevin Corcoran), investigates the wildlife (and starts an impressive collection of animals) and Elizabeth (Dorothy McGuire) prays to be rescued. The boys, particularly Ernst, also build inventions to provide modern amenities to the Robinsons such as drawing water and preserving food.

Fritz and Ernst head off to explore the island and try to see if anyone else lives on it or if it is connected to any other lands. While at a distant corner of it, they again spot the pirates. The pirates have captured another ship and have its captain, Captain Moreland (Cecil Parker), and cabin boy, Bertie, captives for ransom. Fritz and Ernst rescue Bertie, but Captain Moreland says he will find another way. They dodge the pirates and head back to the treehouse. En route, they discover that Bertie is really Captain Moreland's granddaughter, Roberta (Janet Munro), who had to disguise herself as "Bertie" to lower her ransom value with the pirates. They fend off snakes and hyenas as they head home. They arrive back at the treehouse at Christmas.

Father realizes the pirates will try to reclaim Roberta and decides to make a stand against them. Defenses are prepared by building booby traps and fortifying a rocky outcropping. They blow up the ship's wreckage in an attempt to make it difficult for the pirates to remember where the Robinsons ran aground. While prepping for the pirate attack, Fritz and Ernst vie for the affections of Roberta. Ernst is more studious and attempts to sway her with his knowledge and intelligence while Fritz, older and not studious, uses his charm and physical attributes to attract her. Fritz and Ernst eventually come to blows over her and are only stopped by the intervention of Father. He declares the next day the first holiday for "New Switzerland" in an attempt to divert everyone. While prepping for the race (everyone has an animal to ride: Francis has Rocky the elephant, Ernst Clementine the ostrich, Roberta Duchess the zebra, and the monkey on Duke, Mother fires the gun to signal the start of the race; the pirates, who are at that time sailing the coast looking for the place they last saw the ship that brought the Robinsons to the island, hear it and know the family is near.

Led by their captain, Kuala (Sessue Hayakawa), the pirates storm the island. The Robinsons manage a brave defense but are sorely pressed. Their defenses include pits with a tiger in one, rock piles, a log pile and coconut bombs (hollowed out coconuts filled with gunpowder with a fuse), all of which cause problems for the attacking pirates. When Kuala waves a white flag the Robinsons imagine they have routed the pirates, but the pirates are sneaking around the back of the fort instead. Francis' much-maligned "pirate alarm" is the only thing that warns them of the surprise attack. They begin defending the fort but are soon down to only a few shots with their muskets. At this critical moment, a British ship appears on the horizon captained by Captain Moreland and fires its cannons at the pirates and their ship. They retreat and make a desperate escape, and the Robinsons rejoice. Father, Mother, and Francis choose to remain on the island while Captain Moreland notes that this island will likely be a colony legally named New Switzerland where colonists will soon settle (given the fear of Napoleon Bonaparte attacking Switzerland, which was the original reason for the Robinsons' departure), and Father will be recommended as New Switzerland's first territorial governor. As for the rest of the family, Ernst chooses to go to England with the rescuers in order to enroll in a university to continue his studies while Fritz and Roberta plan to marry and make New Switzerland their home.

Associate producer Basil Keys stated in a December 1960 Saturday Evening Post article that Walt Disney and producer Bill Anderson decided to make their own version of Swiss Family Robinson after they viewed RKO Radio Pictures' version. Walt bought the rights to RKO's film and eventually, its copyright was renewed by his company on January 10, 1968.[1][2] Walt is said to have done this in an effort to suppress its re-release and avoid comparisons to his own film. 20 minutes of the RKO version were featured in the "Vault Disney" DVD release of the Disney version.

The film was released on December 10, 1960. It received generally positive reviews by critics and gained large revenue at the box office. All together, it grossed roughly $40,000,000, making it the highest grossing film of 1960 and beating other hits of that year at the box office such as Psycho, Spartacus, and Exodus. Adjusted for ticket price inflation, the box office revenue is $427,773,600, making it one of the biggest hits of all time. It currently holds an 82% approval rating at the review aggregation website Rotten Tomatoes.

Upon the film's initial release, New York Times film critic Howard Thompson lauded it by writing, "it's hard to imagine how the picture could be better as a rousing, humorous and gentle-hearted tale of family love amid primitive isolation and dangers." In his Family Guide to Movies on Video, Henry Herx wrote: "[N]icely directed by Ken Annakin, much of the fun for children will come from the delightful and inventive conveniences the family builds and their relationships with the island's wildlife".

Comparison with the book

The film makes many substantial changes to the plot of the original book, among them:

On December 12, 2004, Variety announced that a remake of the film was in development at Walt Disney Studios with Mandeville Films co-producing it. In June 2005, Variety confirmed that director Jonathan Mostow would helm the director's chair for it. It was to be produced by David Hoberman and Todd Lieberman. Production on it never began and it was believed to be shelved until in early 2009 when it was announced by /Film that it was still in the works. By this time, it was renamed The Robinsons and "designed to star Will Smith, Jada Pinkett Smith and their three kids - Trey, Jaden, and Willow." As of 2015 there have been no official announcements, casting or setting of production dates.

On December 10, 2020, as part of the Disney Investor Day event, a Disney+ remake series was announced, to be directed by Ron Moore and Jon Chu.[4] 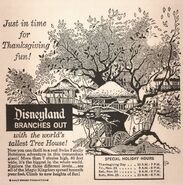 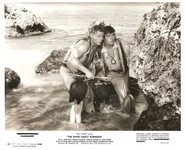 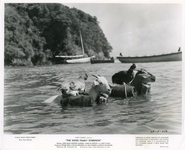 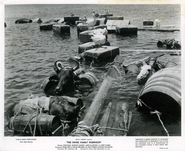 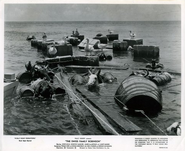 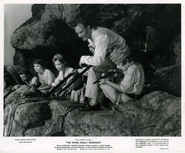 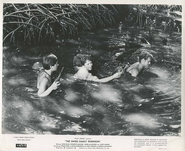 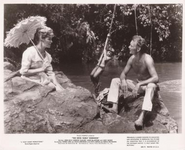 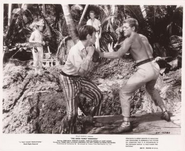 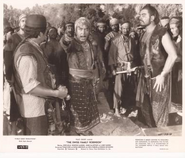 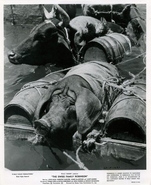