Switzerland (German: Schweiz, French: Suisse, Italian: Svizzera, Romansch: Svizra, Latin: Confoederatio Helvetica) is a landlocked country in Central Europe. It has borders with France to the west, Italy to the south, Austria and Liechtenstein to the east and Germany to the north.

The climate is temperate, but varies with altitude. Switzerland has cold, cloudy, rainy/snowy winters and cool to warm, cloudy, humid summers with occasional showers.

Switzerland is known for its mountains (Alps in south, Jura in northwest), but it also has a central plateau of rolling hills, plains, and large lakes. The highest point is Dufourspitze at 4,634m (2.879 miles), while the lowest point is Lake Maggiore at only 195m (639.764 feet) above sea level.

Switzerland's independence and neutrality have long been honored by the major European powers and Switzerland has not been involved in any military conflict since 1815. The political and economic integration of Europe over the past half century, as well as Switzerland's role in many UN and international organizations has strengthened Switzerland's ties with its neighbors. However, the country did not officially become a UN member until 2002. Switzerland remains active in many UN and international organizations, but retains a strong commitment to neutrality.

Switzerland showcases three of Europe's most distinct cultures. To the northeast is the clean and correct, 8-to-5-working, stiffer Swiss-German-speaking Switzerland; to the southwest you find the wine drinking and laissez-faire style known from the French; in the southeast, south of the Alps, the sun warms cappuccino-sippers loitering in Italian-style plazas; and in the center: classic Swiss alphorns and mountain landscapes. Binding it all together is a distinct Swiss mentality.

Switzerland is a peaceful, prosperous, and stable modern market economy with low unemployment, a highly skilled labor force, and a per capita GDP larger than that of the big Western European economies. The Swiss in recent years have brought their economic practices largely into conformity with the EU's to enhance their international competitiveness. Switzerland remains a safe haven for investors, because it has maintained a degree of bank secrecy and has kept up the franc's long-term external value. Reflecting the anemic economic conditions of Europe, GDP growth dropped in 2001 to about 0.8%, to 0.2% in 2002, and to -0.3% in 2003, with a small rise to 1.8% in 2004-05. Even so, unemployment has remained at less than half the EU average. 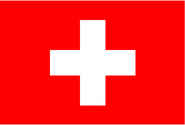 Houses and banks of Aare River in Bern, Switzerland 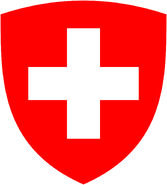 Coat of arms of Switzerland