This article is about the weapon used by Jake. For other uses, see Sword (disambiguation).

The Sword of Destiny (also called the Destiny Sword) is a magical, golden sword bestowed upon Jake in the special series Jake and the Never Land Pirates: Never Land Rescue.

The Sword of Destiny is a scimitar, golden in color and shining bright like a sun.

When Jake finally reaches the door to the Forever Tree after facing various trials of a fading Neverland, he uses a medallion the guardian gave him to open the door. He gets a new golden sword from the old tree, and then the tree disappears. When he reaches the summit of Mount Destiny, the Guardian of Never Land advises Jake to lift the sword to the stars. He does so, which causes a shockwave that enters into the cavern where the old tree died out.

Meanwhile, the rest of Jake's crew has finally gotten rid of Captain Hook, just in time for a small little light to find them and lead them to Jake and the guardian, who need their help to make a new Forever Tree grow. They scream, "Yo Ho, Forever Tree Grow!" continuously, and a new Forever Tree grows, the magic is restored, everything reappears, and Never Land is saved.

The Sword of Destiny reappears in the special Jake and the Never Land Pirates: Battle for the Book.

The Destiny Sword reappears in the season 3 finale, The Great Never Sea Conquest, only with a more prominent role. After suffering a humiliating defeat at the hands of Lord Fathom, Jake and the other captains re-group to find another strategy. The young pirate leader suggests finding a battleship that can withstand Lord Fathom and his corruptive forces, similar to the Mighty Colossus. Although Captain Hook shoots down Jake's enthusiasm, Jake remains confident that they will save their home. Suddenly, the Destiny Sword flashes and releases a magical surge that heads into the water and resurrects the Colossus. Unfortunately, the captain of the Colossus is nowhere to be found, which prompts the pirates to elect Jake as its new captain. Soon, Jake's Destiny Sword transforms him into an official pirate captain, with the sword transforming into a Mighty Captain's Sword. 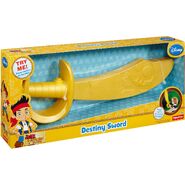