Lord Hater, being picked on, Watchdogs, Emperor Awesome, her former partner Rider, losing Wander, being woken up while sleeping, Wander's annoyance, Wander in danger, Lord Dominator and her army

"Put 'em up! Wanna mess with me?"
"Forget it. Sappy, smoshy-wooshy lovey-dovey silliness ain't my style!"

“Listen, you oversized chunk of carbon, there isn't a mountain too high, a valley too low, or a river too wide to keep apart a pair of pals like Wander and I!”
―Sylvia

Sylvia is Wander's loyal and bullish steed and the deuteragonist in the Disney Channel animated series Wander Over Yonder.

Sylvia is obviously tough-as-nails and serious when it comes to dealing with bad guys, especially Lord Hater and his watchdogs. She sometimes get annoyed with Wander when he messes up their plans by being helpful to others or making her do something that is not her style. But deep down, she's Wander's biggest fan, always there for him whenever he heads into trouble or danger and cares very deeply about him. This caring is extremely shown in "The Pet" where she cries when she believes that Wander was killed by the spider-like creature (but what she saw was really the remains of a teddy bear Wander gave to "Captain Tim") and mourns deeply for him as she leaves, until she sees him alive and well and rushes back to rescue him. Afterwards she gives Wander a hug and smiles, clearly relieved that her best friend is all right.

Sylvia bears blue scales, has a long neck, stubby arms, big expressive eyes, and large two toed feet. She has a black rein wrapped around her muzzle and a big floppy tuft of red hair jutting upward from her head, matching the tuft of fur on the tip of her tail. 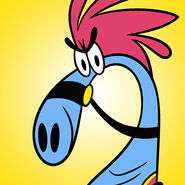 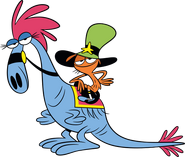 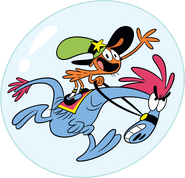 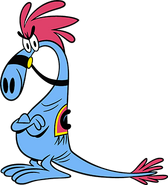 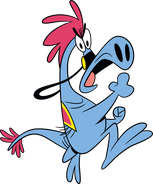 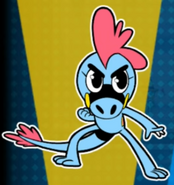 Retrieved from "https://disney.fandom.com/wiki/Sylvia?oldid=3757922"
Community content is available under CC-BY-SA unless otherwise noted.