Disney Wiki
Register
Don't have an account?
Sign In
Advertisement
in: Objects, Machines, Honey, I Shrunk the Kids, Technology

Honey, I Shrunk the Kids
Honey, I Blew Up the Kid
Honey, We Shrunk Ourselves

Honey, I Shrunk the Kids: The TV Show

To shrink and grow objects and people beyond their natural size

Intact
The Shrinking Machine is a machine that plays an important role in the Honey, I Shrunk the Kids films and has made minor appearances in the TV Series. Built by wacky inventor Wayne Szalinski, it is capable of shrinking and growing objects or people beyond their natural size.

Honey, I Shrunk the Kids

Eccentrici inventor Wayne Szalinski spends all night working on the machine and by morning he finishes it and begins the tests. However instead of shrinking it blows things up.

While Wayne is at work, the machine is accidentally activated by a baseball that was shot through the window by Ron Thompson and lands in the path of its laser. This also solves the problem of why it blows things up because the laser was radiating too much heat. Without the laser in the way, the machine successfully not just shrinks the furniture in the attic but also Nick, Amy, Russ and Ron to 1/4 of an inch tall.

When Wayne comes home he takes out his anger and humiliation on the machine, calling it a waste of five years of work, by destroying it little knowing that it actually works. He soon finds out that it does when he finds his couch shrunk and finds out the kids are shrunk too. He spends the whole night fixing the machine and after they find the kids he uses it to grow them back to normal size.

Wayne works on a second machine only this time designed to grow things. Dr. Charles Hendrickson wants to take control of his project but fails to make it work. During the weekend Wayne takes Nick and his younger son Adam to the lab to see if they can make the Growth Machine work. They try defusing it by jamming the bottom piece of a glass bottle in the path of its laser, unfortunately this causes a power surge that destroys the entire experiment and erasing the database. However they succeed when Adam grows to seven feet tall and keeps on growing every time he's near an electrical device.

Since the machine at the lab is no option to go to, Wayne suggests using his original machine which had been put in storage. Wayne fits it into the back of the family's solar van and drive it home only to discover Adam had gotten bigger and on the loose. Wayne successfully shrinks Adam back to normal size with the help of his wife Diane.

The shrink ray has caught the attention of the Smithsonian Institution, who wish to put it on display. Wayne, now the president of Szalinski Labs, is thrilled with the idea but insists on dismantling it and re-assembling it at the institution himself. It is also revealed that Diane, along with a committee from the FDA, has banned Wayne from using the shrink ray for life.

Once in the attic, Gordon admires the improvements Wayne has made to the shrink ray, the most noticeable of which is a large red button which must be pressed to activate the machine once it reaches full power. The button can be locked with a key to prevent the machine from accidentally being activated (to avoid further shrinking incidents). When Wayne starts turning the machine on, Gordon reminds Wayne of the FDA forbidding him from using it, but Wayne chooses to ignore it as Diane is not there. The men succeed in shrinking the Tiki Man. However, the vibration from the machine causes a billiard ball to fall down from the shelf above the machine, which lands on the button, activating the machine and shrinking the men.

A little while later, Diane and Patti arrive back at the house to drop off medication for Gordon's son Mitch, who has a potassium deficiency. They hear noises coming from the attic and decide to go investigate. When they arrive in the attic, they find that the shrink ray is on. Diane reminds Patti of the FDA committee and they turn to leave, but a second ball falls on the machine's button, activating it and shrinking the women.

Once the adults come to terms with the fact that they are shrunk, they work together to get the kids' attention. Ultimately Wayne slips inside the stereo and rewires the speaker to make it into a microphone. He instructs Gordon to yell into it. Their plan works, and the kids take the adults back into the attic to be un-shrunk. The Tiki Man is done so as well, and Wayne promises he will get rid of it. Diane, however, changes her mind and tells Wayne that she wants him to have fun, and to do whatever he wants with the Tiki Man.

At the end of the film, it is revealed that Wayne has moved the Tiki Man into the backyard, and used the machine to make it grow to an enormous size.

Wayne invents a new and improved version of the shrink machine and accidentally opens fire upon the guests.

The Shrinking Machine automatically powering up

The Shrinking Machine under construction

The Shrinking Machine from Honey, We Shrunk Ourselves in the prop warehouse

The Shrinking Machine in Honey, We Shrunk Ourselves 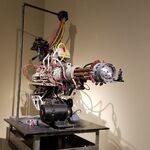 The Shrinking Machine at the Bowers Museum

AS a badge in Disney Heroes: Battle Mode