The T-70 X-wing fighter is a modern variation of the classic design X-Wing starfighter used by the Resistance in their fight against the First Order. The most well known member of the Resistance who pilots this ship is Poe Dameron.

Poe Dameron and his X-wing squadron fly across the water.

Poe's X-Wing during the Battle of Takodana.

T-70 X-wings during the Battle of Starkiller Base.

Poe's X-wing during the Battle of D'Qar in Star Wars: The Last Jedi.

Poe's X-Wing being destroyed when Kylo Ren fires on the hangar of the Raddus.

The Black One in Star Wars Battlefront II. 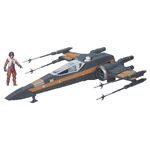