“I'll take them myself. Cover me.”
―Darth Vader preparing to take on the enemy alone.

TIE Advanced x1 (better known as Darth Vader's TIE Fighter) is an advanced prototype starfighter as a replacement for the standard TIE Fighter, tested by Darth Vader himself. Its weaponry includes two laser cannons and a Cluster Missile Launcher that can launch twenty missiles and is also equipped with hyperdrive.

This particular vessel was one of several TIE prototypes fielded by the Sienar Fleet Systems design team during the critical years between the Battle of Yavin and the death of the Emperor at Endor. The TIE Advanced x1 was perhaps the most successful of these prototypes, and many of the refinements in that vessel were later incorporated into the TIE Interceptor and the TIE Advanced (TIE/AD) ship dubbed the "TIE Avenger".

The TIE Advanced x1 featured a custom-designed spaceframe and a reinforced durasteel-alloy hull, with an elongated rear deck and matching bent wings covered with solar panels. The Vessel mounted a Sienar Fleet Systems (SFS) I-S3a solar ionization reactor and paired SFS P-s5.6 twin ion engines for a far more powerful drive system than that of a standard TIE/LN. Speed was only slightly improved over earlier models, due to the added mass and to the fact that a good deal of extra power was bled off to the shield generators. The TIE Advanced x1 was less maneuverable than standard TIE Fighters, but it could take far more punishment than could the fragile TIE/LN ships.

The TIE Advanced x1 lacked a life support system, and the pilot had to wear a fully contained flight suit with an internal oxygen supply. Pilots were strapped into an adjustable shock couch with foot yokes and a hand control panel.

The TIE Advanced x1 was initially produced in only very modest numbers. Lord Darth Vader received one of the vessels for his personal missions; most of the other ships were deployed to elite Imperial squadrons for field testing. By the time of the Battle of Hoth, TIE Advanced x1 fighters had been deployed to a number of Navy fleets, including Lord Vader's Star Destroyer squadron.

The Empire decided not to order the TIE Advanced x1 in large quantities, citing the excessive cost. Privately, some Imperial Navy strategists admitted that the Navy was afraid to purchase a fighter with a hyperdrive, fearing that it would provide an excuse to slash orders for new capital starships. 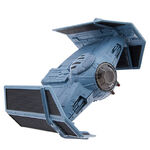 Retrieved from "https://disney.fandom.com/wiki/TIE_Advanced_x1?oldid=2362764"
Community content is available under CC-BY-SA unless otherwise noted.