Star Wars: Rise of the Resistance

The TIE/vn space superiority fighter (also known as the TIE silencer) is an angular variant TIE starfighter used by the First Order in the Star Wars sequel trilogy. Kylo Ren used one such ship during the First Order–Resistance war before replacing it with the TIE whisper.

The TIE silencer is an advanced prototype starfighter with advances in power capacity, allowing it to support heavier weapons, and was produced especifically to be used by the top elite members of the First Order. It is a product of the manufacturer Sienar-Jaemus Fleet Systems and has its origins traced back to the Empire's TIE defender, which was a hybrid of a fighter with a bomber that never had a widespread use during the Galactic Civil War, however, the tacticians of the First Order noticed its versatilities and decided to revive them in their war against the New Republic and the Resistance.

The advances in power capacity were previously tested by the First Order designers in the Special Forces TIE, as they made changes in the energy conversion and power storage of the ship which were later incorpored with improvements in the TIE silencer. Different from the Special Forces TIE, this ship has its missiles launchers and heavy laser cannons at the wing apertures instead of having a ventral turret, which allows both a wider field to fire and a much better targeting. Beneath its hull, there is also a next generation array that replaces the power cell spokes of Special Forces TIE and has shorter runs for converter coils and trunk lines.

The result of these improvements is a fighter that has an aggressive design and is incredibly powerful, being able to destroy shields and armor of the capital ships. In addition to its military innovations, this ship also has a stealth gear to confuse sensors and tracking and customized flight controls. This starfighter is also crafted to be used for speed and handling, a task that might be not accomplished by lesser pilots that can be overwhelmed with its velocity and lose control of the ship.

Kylo Ren uses his own TIE silencer while fully exploiting the ship's speed and ferocity thanks to his natural skills as a pilot inherited from his father. By flying his TIE silencer, Kylo follows the tradition of prototype starfighters being tested by ace pilots, as some Imperials such as Vader and Vult Skerris did during the Galatic Empire. He also follows own family tradition since he is an expert pilot who is the son of Han Solo, grandson of Anakin Skywalker and nephew of Luke Skywalker, all of whom are known for having the best piloting skills in the galaxy. With the intention of refining this model of ship for possible future mass production and use in frontline units, Kylo also makes post-flight reports that allow Sienar-Jaemus techs to improve the onboard systems.

The TIE silencer is a black colored craft that has an angular shape, twin ion engines, round cockpit with red designs, and solar collectors as wings. This design is reminiscent of the Galactic Empire's TIE interceptor and Darth Vader's TIE advanced, and is also similar to the one of Kylo's next ship.

After being berated by his master, Kylo Ren flew his TIE silencer leading an attack to the Resistance fleet with the intent to destroy the First Order's enemies and prove that Snoke was wrong about him. He manages to blow up the hangar of the Resistance MC85 Star Cruiser, the Raddus, which results in the death of several X-wing pilots, with Poe Dameron, Finn and BB-8 witnessing the destruction very close by. Kylo proceeds to fly towards the bridge of the cruiser, however, he stops his attack upon sensing the presence of his mother inside the Raddus, making him unwilling to fire to completely destroy the ship. 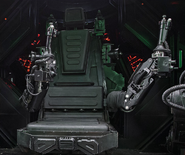 Kylo Ren inside the cockpit of his TIE silencer. 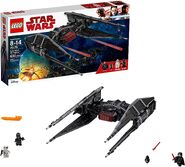 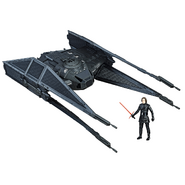