TIE/wi modified interceptor (also known as TIE whisper) is a type of TIE starfighter used by the First Order. After Kylo Ren became the new Supreme Leader, he requested this model of starfighter to be manufactured with his specified modifications. Kylo replaced his TIE silencer for this model of ship, using it to travel to Exegol, to confront Rey on Pasaana and to follow her to the ruins of the second Death Star.

The TIE whisper is a modified starfighter according to Kylo Ren's specifications. Being a highly skilled pilot, Kylo was never satisfied with the speed and responsiveness of his ship, so he requested the First Order engineers a craft with more speed, firepower, and range than the standard model. Like the other crafts of the TIE line, it is a product of the manufacturer Sienar-Jaemus Fleet Systems.

The ship also has a sensor-confusing technology that allows it to be undetected by enemies, making it appropriated for stealth operations, besides being capable of extended hyperspace transit. The wings are equipped with laser cannons, heavy cannons, and a heavy weapons turret which has heavy lasers and mag-pulses.

The design of this model is very similar to the one of Kylo's previous ship, being black colored and also having an angular shape, twin ion engines, solar collectors as wings, round cockpit with red designs but with the addition of an antenna at the rear.

Kylo Ren equipped his new TIE whisper with the Sith wayfinder he found on Mustafar to guide his way to Exegol, where he meets and confronts the revived Emperor Palpatine. Later, he flies his TIE whisper at high speed towards Rey upon encountering her on Pasaana. Rey is able to dodge and take it down by cutting his TIE whisper with the lightsaber, causing it to crash-land on the desert. The ship is destroyed during the crash, but Kylo manages to leave from it unharmed.

Afterwards, Kylo Ren goes to the ruins of the second Death Star using another TIE whisper. He duels Rey at the top of the ruins, and she steals his ship after their battle. Rey flies the TIE whisper to Ahch-To's Temple island, where she burns it, intending to exile herself at the island. However, after meeting Luke Skywalker's Force spirit, Rey is motivated to fight Emperor Palpatine and upon checking the wreckage of Kylo's ship, she finds the Sith wayfinder that was in his possession and she later uses it to travel to Exegol. 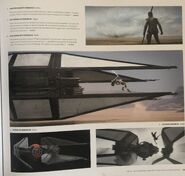 Kylo's TIE whisper crashed on Pasaana after Rey cutting it with the lightsaber.

Rey destroys another one of Kylo's TIE whispers on Ahch-To. 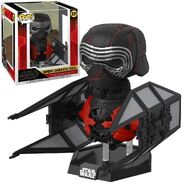 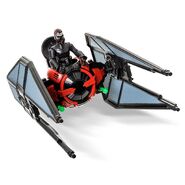