TRON Lightcycle Power Run (also known as TRON Lightcycle/Run) is a semi-enclosed launched steel roller coaster attraction that opened at Shanghai Disneyland in 2016, with a second iteration set to open at Walt Disney World's Magic Kingdom in 2023. Based on the Tron: Legacy series, the attraction takes guests on a ride through The Grid on their own Light Cycles. The coaster's track takes riders inside and outside the attraction's building, reaching speeds of over 60 miles per hour (97 km/h)—the fastest for any Disney roller coaster.[3][4] The ride debuted along with the rest of the park on June 16, 2016.

At the 2017 D23 Expo, Bob Chapek, the Chairman of Walt Disney Parks and Resorts, announced that a second TRON Lightcycle Power Run will be constructed in Tomorrowland at Walt Disney World's Magic Kingdom, adjacent to Space Mountain. It will be built on a plot of land that had been set aside for a Florida clone of the Matterhorn Bobsleds when the park was originally constructed. The attraction was originally set to open in 2021 in time for Walt Disney World's 50th Anniversary celebration. However, it was delayed to 2023, since the opening was postponed indefinitely following the closure of the park due to the coronavirus pandemic (COVID-19).[5]

The attraction is located indoors, underneath a color-shifting canopy[6] in Tomorrowland.

The attraction's motorbike-styled vehicles were created by Walt Disney Imagineering as a method of specializing individual rider experience. The ride was then given a Tron theme because the ride vehicles resembled the lightcycles featured in Tron: Legacy.[3][7] When aboard the ride vehicle, riders lean forward and grip a set of handlebars. A pad situated behind the seat secures the rider in place.[8]

Also, a car-shaped coaster was introduced for handicapped or disabled people to the Magic Kingdom version.

Riding atop individual, two-wheeled Light Cycles, guests will be launched across a canopied section of track – the Upload Conduit – before diving high-speed into a mysterious game world of lights, projection and sound effects. Guests waiting to board will have fun imagining the Grid as they listen to the evocative soundtrack and watch the Light Cycle trains twist and turn all around them, all under a color-shifting canopy.

Even at a distance, guests will marvel at the massive, undulating canopy. Covered in a translucent material, it reveals the pulsing glow of Light Cycle trains as they zip through the attraction. The entire canopy is edged in a dramatic, blue-green ribbon that changes color as it rolls across, over, and around the Tron Plaza, like the tail of a dragon.

The majority of the music in the ride is a remix of the themes created for Tron: Legacy by Daft Punk, most notably “The Grid” and “The Game has Changed”. 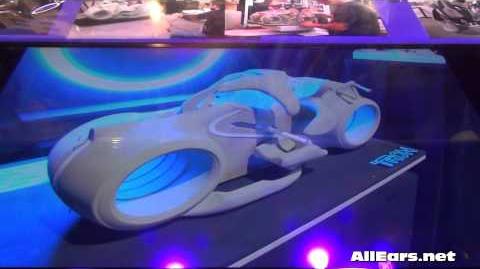