Getting left behind, not getting what she wants

Attends Robin Hood and Maid Marian's wedding, and tries to catch the bouquet of flowers.

"Good-bye, Mr. 'Wobin' Hood! Come again on my 'birfday'!"
Tagalong is a character in Robin Hood. She is the youngest daughter of Mother Rabbit and a sister of Skippy, Sis and lots of other rabbit siblings. She is voiced by Dora Whitaker, one of Johnny Whitaker's siblings, making her and Skippy the first animated Disney film siblings to be voiced by real-life siblings. She is about 2 or 3 years old.

Tagalong wears a purple shirt and carries a toy rabbit. It can be assumed that she is a toddler, due to her size and speech. She is usually seen with her siblings, Sis and Skippy.

As her name suggests, she is usually seen tagging along with her older siblings. She is first seen at Skippy's birthday party. When Sis laughs at the sight of Skippy wearing Robin Hood's hat (which Robin gave to Skippy because as the latter asked how he looked [with the bow and arrow], she said he "[didn't look] much like Robin Hood"), she repeats her mother in scolding Sis to mind her manners. She then tells Robin to come again on her birthday. She later accompanies Skippy and friends when he goes to test out his new bow and arrow. When they meet Maid Marian and Lady Kluck, she remarks that Maid Marian and Robin Hood are said to be sweethearts.

She can be spotted at the archery tournament as one of the spectators, and is later imprisoned along with her family for failing to pay taxes. When Robin Hood leads a jail break, she falls behind. Robin goes back to retrieve her, but is cut off by the portcullis. Thankfully, Tagalong is small enough to slip through the lattice, as Robin pushes her through one, handing her to Little John on the other side, who then brings her to her mother. At the end of the film, she attends Robin Hood's and Maid Marian's wedding where she tries to catch Marian's flower bouquet but loses out to Sis, which makes her angry. 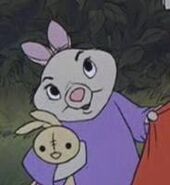 Tagalong with Skippy, Sis and Toby.
Add a photo to this gallery
Retrieved from "https://disney.fandom.com/wiki/Tagalong?oldid=1040338"
Community content is available under CC-BY-SA unless otherwise noted.