Tahitian Terrace was a Polynesian themed restaurant at Disneyland during the 1960s. It was placed in Adventureland. It had dishes such as skewered chicken, a tropical fruit salad, and other traditional Hawaiian dishes. There was also a show with native dancers. It operated from 1962 until 1993 when it was replaced by Aladdin's Oasis.

The restaurant had opened another version at Hong Kong Disneyland. This version is a smaller scale quick-service restaurant featuring many of the Tiki Gods from Disneyland's Enchanted Tiki Room pre-show.

A description taken from the back of the original menus:

Welcome to the wondrous realm of Polynesia… the Tahitian Terrace! Here Walt Disney has opened wide the portals to an enchanting island world across the blue Pacific… a world of romance, beauty and exciting entertainment!

Towering high above you is an amazing tree, a tree that grew (in less than a year) to a height of 35 feet through a secret formula of Walt Disney and his "imagineers"! The branches of this "species Disneyodendron" are laden with more then 14,075 hand-grafted leaves and fiery-colored flowers that bloom perpetually. Today this species is Disneyland's second larges of this rare, unnatural species, exceeded only by the Swiss Family Treehouse.

Nestled beneath the tumbling waterfall is a matchless stage setting … a stage whose curtain is a cascade of water, and whose "footlights" are a leaping flame of fire burning on the water itself! For your summer behind the waters, sarong-clad natives appear to perform the swaying rhythms and amazing rituals of the islands… the hypnotic barefoot "twist" of Samoa, Tahiti and Hawaii. (The dedicated student will note how the story-telling technique varies from island to island.. here a hip movement, there the entire torso)

This unique amphitheater, Disneyland's Tahitian Terrace, is open on Summer afternoons for  your dining pleasure, and every Summer evening, for dining and polynesian shows. Sunday evening, dining only

The dinner show was famously featured on the Wonderful World of Color episode Disneyland After Dark.

Guest can enjoy a festive quick-service meal in an open-air veranda or a lushly landscaped courtyard filled with cheeky tikis. An ocean of South Asian delights awaits them, including choices like lemongrass chicken steak, Thai chicken curry with Rendang beef and Singaporean laksa rice noodle soup.

All meat items served in Tahitian Terrace are certified by The Incorporated Trustees of The Islamic Community Fund of Hong Kong. All menu items are subject to change without notice. 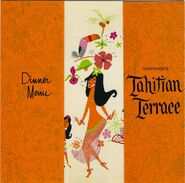 Open Disneyland menu from the 1970s. 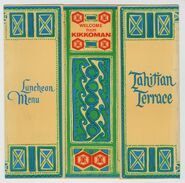 Kikkoman-era Disneyland menu
Add a photo to this gallery

Maui by the dining area
Add a photo to this gallery

Retrieved from "https://disney.fandom.com/wiki/Tahitian_Terrace?oldid=3149092"
Community content is available under CC-BY-SA unless otherwise noted.