Take Me Out of the Ballgame (DuckTales)

DuckTales
"Take Me Out of the Ballgame"

November 30, 1987
"Take Me Out of the Ballgame" is the second segment of the fifty-first episode of DuckTales.

Huey, Dewey, and Louie are getting ready for their baseball game and waiting for their coach Launchpad to arrive, but apparently Scrooge needs Launchpad for a mission, leaving Duckworth to coach for the Junior Woodchucks team.

Duckworth, not knowing much about baseball, still decides to agree. The butler treats baseball as if it was cricket, leading to confusion on the team. Whenever one of the players wants to do something like sliding or stealing, Duckworth stops them from doing so, leading them to lose majorly against some beagle kids, who Ma Beagle is coaching.

Near the end of the game, Duckworth finally gets the idea that baseball isn't a sport that's all too comparable cricket, and is finally able to coach them well, and eventually beat their opponents.

Ma Beagle and the Beagle Brats

Duckworth acting as the standin coach

"You're a beagle, and beagles cheat!"

Big Time, Burger, and Bouncer at the game 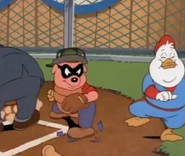 Doofus wins the game for the team