Disney Wiki
Register
Don't have an account?
Sign In
Advertisement
in: Article of the week, Animated television series, TaleSpin,
and 7 more
English

TaleSpin is an American animated television series based in the fictional city of Cape Suzette. It first aired in 1990 as part of The Disney Afternoon starring characters from Disney's 1967 animated feature film, The Jungle Book. The name of the show is a play on "tailspin": the rapid, commonly fatal descent of an aircraft in a steep spiral. The two words in the show's name, tale and spin are a way to describe telling a story, i.e. putting a spin on a tale. The show is one of the nine Disney Afternoon shows to use established Disney characters as the main characters, with the others being Darkwing Duck, DuckTales, Chip 'n Dale Rescue Rangers, Goof Troop, Bonkers, Quack Pack, Aladdin, and Timon & Pumbaa.

After a preview of The Disney Afternoon that aired on the Disney Channel in May 1990, the series began its run in September of the same year. The original concept was embodied in the introductory television movie "Plunder and Lightning" which was nominated for an Emmy Award for Outstanding Animated Program (Prime Time for Programming One Hour or More) in 1991 and was later re-edited into four half-hour episodes for reruns. The show was often seen either on its own as a half-hour show, or as part of the two-hour syndicated series The Disney Afternoon. TaleSpin ended on its 65th episode which ran in 1991, later nominated for another Emmy Award for Outstanding Animated Program (Entire Series) in the same year. However, reruns continued to be shown on the Disney Afternoon through 1994. Afterwards, it was moved to the Disney Channel and later to Toon Disney.

Three of the characters previously starred in Disney's animated film version of The Jungle Book: Baloo as the hot-shot pilot hero of the series; Louie as the owner of Baloo's favorite bar; and Shere Khan as a business tycoon who appears in many episodes.

Kit seems to be a stand-in for Mowgli, since Baloo calls him by the same nicknames his Jungle Book counterpart called Mowgli, like "Little Britches" and "Baby Bear". In addition to this, Kit, like Mowgli before him, calls Baloo "Papa Bear".

Also, many of the series concepts seem to be based on the 1982 ABC series, Tales of the Gold Monkey, including the main concept of a cocky flying boat cargo pilot and his rocky relationship with his girlfriend, his scatterbrained mechanic sidekick, the era, and designs of the aircraft and costumes, the Pacific Islands setting, the secondary character relationships, even the visual appearance of the lagoon. Also, the protagonists of both TV series fly planes named for waterfowl (Cutter's Goose and Sea Duck) and are regular denizens of taverns named "Louie's."

There are also many similarities to Hayao Miyazaki's film Porco Rosso about an anthropomorphic pig who flies a seaplane and fights air pirates. While the film was released in 1992 (two years after TaleSpin had already aired), Porco Rosso is based on Miyazaki's manga, Hikōtei Jidai which was first published in 1989.

The series was largely developed by writers Jymn Magon and Mark Zaslove, who were also the Supervising Producers on the series as well as Story Editors. There were four production teams, each one headed by a Producer/Director: Robert Taylor, Larry Latham, Jamie Mitchell, and Ed Ghertner.

TaleSpin is set in the fictional city - state of Cape Suzette (a pun on the pancake dish, Crêpe Suzette), a harbor town protected by giant rocky cliffs through which only a small opening exists. The opening in the cliffs is guarded by anti-aircraft artillery, preventing flying rabble rousers or air pirates from entering the city. Characters in the world of TaleSpin are anthropomorphic animals. The timeframe of the series is never specifically addressed, but appears to be in the late 1930's, probably beginning in late December[1] 1937, as it is stated in the episode "Bygones" that World War I "ended twenty years ago" (which would make that episode's present year 1938). Additionally, the helicopter and jet engine are experimental devices[2][3], most architecture is reminiscent of the art deco style of that period, radio is the primary mass medium (In one episode, the local station is identified as "K-CAPE"), and television is a still-new concept not yet widely known.[4]

The series centered on the adventures of bush pilot Baloo, whose failing air cargo freight business is bought out by Rebecca Cunningham, single mother of six-year-old Molly Cunningham, and renamed 'Higher for Hire'. An orphan boy and former air pirate, the ambitious teen cub Kit Cloudkicker, attaches to Baloo and becomes his navigator. He sometimes calls him "Papa Bear". Together, they are the crew of Higher for Hire's only aircraft, a modified Conwing L-16 named the Sea Duck. From there, the series follows the ups and downs of Higher for Hire and its staff, and Baloo's best friend Louie, sometimes in the vein of old action-adventure film serials of the 1930s and '40s, which are similar to Raiders of the Lost Ark.

Their adventures often involve encounters with a gang of Air Pirates led by Don Karnage, business tycoon Shere Khan, the military representatives of Thembria, which is a parody of the Stalinist Soviet Union inhabited by blue, anthropomorphic warthogs, or other, often even stranger obstacles.

The relationship between Baloo and Rebecca owes something to the screwball comedy films of the 1930's. It's even more closely patterned after the later years of the television sitcom, "Cheers"—in both shows, a buttoned-down businesswoman named Rebecca takes the reins of a struggling company, then hires its previous owner (a fun-loving, but irresponsible slacker) to do most of the work for her.

A video game by Capcom was also released on the NES and Game Boy. Sega produced a different version for the Sega Genesis and Sega Game Gear. A third incarnation was produced by Hudson Soft for the TurboGrafx-16.

Famed Uncle Scrooge comic writer and artist Don Rosa, contributed with episode 5, "I Only Have Ice for You", and with episode 9, "It Came From Beneath the Sea Duck".

Two episodes of TaleSpin drew varied amounts of controversy, enough for one episode to be temporarily banned and the other to be permanently banned.

The first of these, the episode "Last Horizons", was temporarily banned and taken off the air. Investigation of the event has since revealed that the reason for its temporary removal was the alleged stereotyping of Asians. The villain in the episode is an anthropomorphic panda Emperor named Wan Lo (voiced by actor Robert Ito) living in a mock-pre-WWII Asian nation called "Panda-La", who takes Baloo into his country to exploit his naiveté and attacks Cape Suzette. There is a reference how their lust for conquest is not shared by all of their species with "Good Pandas especially dislike us."

The fictitious nation may have been a take on Japan, which attacked the US naval base at Pearl Harbor, Hawaii on December 7, 1941. That incident ushered America's entry into the Second World War.

The second episode, "Flying Dupes" (coincidentally the last of the series) was aired for the first time on August 8, 1992 and immediately pulled from the lineup, not to be seen again for over a decade. It aired once on Toon Disney, possibly by mistake, and has never been re-broadcast since. Considered by Disney to be a banned episode, the apparent reason for this episode's permanent removal from the airwaves is the terrorist theme associated with it. Despite this ban, the episode was aired repeatedly by independent stations, including Seattle-based KSTW-TV and Family Channel in Canada. The two banned episodes are also aired on German TV (dubbed) whenever the series is broadcast.

The general synopsis of the episode begins with Baloo being asked to deliver a goodwill present (a cuckoo clock, he is told) to the High Marshall of Thembria from Cape Suzette. Baloo is unaware until the end of the episode that the package actually contains a time bomb planted by munitions manufacturers who wish to provoke a war between Thembria and Cape Suzette in order to boost weapons sales. It's also possible the 9/11 attacks contributed to the permanent ban.

Another controversy related to TaleSpin involved the character Louie. In 2001, the widow of Louis Prima, who had voiced the scat singing orangutan in The Jungle Book, filed suit against Disney for "breach of contract, non-payment of royalties, unjust enrichment, fraud and negligent misrepresentation". At issue were back royalties owed for profits made from video and DVD sales of The Jungle Book and unauthorized use of her husband's voice and its likeness in shows like TaleSpin (Jim Cummings' impersonation of Prima's voice was near-perfect).

Although the case was eventually settled out of court, Disney has since chosen to avoid any further trouble and has refrained from using the character in anything else. It was due to this lawsuit that Louie was conspicuously absent from The Jungle Book 2 (2003); he is the only major Jungle Book character to not appear in the 2003 film. Additionally, an episode of House of Mouse included a similar-looking character referred to as Louie's twin brother, King Larry, who was also voiced by Jim Cummings. In the 2016 remake of The Jungle Book, the character of Louie was presented as completely different in concept, resembling his counterpart from the animated film in name only.

A monthly comic book based on the show was published by Disney Comics in 1991, running for seven issues (eleven, counting a four-issue mini-series based on the series premiere). Bobby JG Weiss was the writer for issues 1-4 and 6-7. As issue 5 was adapted from the episode 41, "The Old Man and the Sea Duck", Weiss only is credited for adaptation.

The comic's cancellation seven months later terminated several planned stories that would have revealed pieces of background for the main characters. Issue 7 explored Kit's past, and how he joined up with the pirates. According to the letter page in #3, a planned story for the comic's annual would have explored the origins of the Iron Vulture. #4-7 would have letters 'answered' by the characters.

Subsequent comic stories were also printed in Disney Adventures from 1990 to 1995, one of which was notably reprinted in the Summer 2006 issue of Disney Adventures Comic Zone Magazine. Two new stories also appeared in The Disney Afternoon comic book published by Marvel Comics.

The Disney Wiki has a collection of images and media related to TaleSpin. 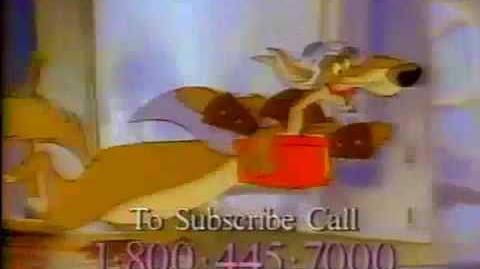 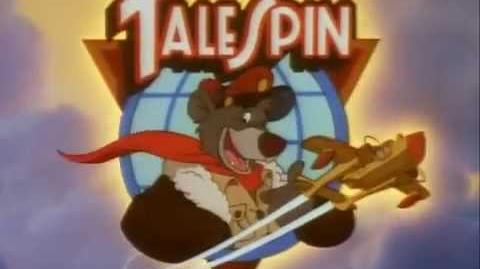