TaleSpin is a 2D platformer developed by Capcom for the NES in 1991. It is based on the television cartoon of the same name. A Game Boy version was released in 1992.

This game involves the adventures of Baloo and Kit delivering cargo for Rebecca Cunningham's Higher for Hire. However, Shere Khan wants to put Rebecca out of business, so he hires the Air Pirates, led by Don Karnage, to do his dirty work.

In the NES and Game Boy games, Baloo has to deliver his cargo across the world while fighting the pirates who are trying to stop him. Players control Baloo in his plane The Sea Duck, except upon entry to a bonus level, where the player then controls Kit on his airfoil. 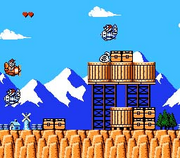 Gameplay to the NES version 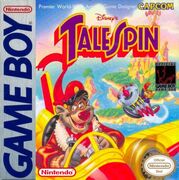 Cover to the Game Boy version 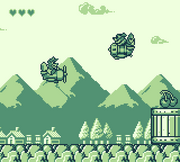 Gameplay from the Game Boy version

Promotional artwork used as the cover for all the platforms