Disney Wiki
Register
Don't have an account?
Sign In
Advertisement
in: Characters, Mystical animals, Phineas and Ferb characters,
and 9 more

Zebras, the Cheshire Cat
The Talking Zebra[2] is a recurring character from the animated television series, Phineas and Ferb. He is a being that exists as a figment of Candace's imagination. For unknown reasons, he always calls her "Kevin."

While Candace was under the "influence" of the orange moss, the Zebra appeared when she was having hallucinations. The Zebra says, "Oh, it gets much stranger, Kevin," while sitting in the rocking chair on the pier, drinking tea/coffee. However, it is revealed that she was simply seeing things, as it was the blue moss (not the orange) which was actually hallucinogenic. At the end of the day, she does in fact touch the blue moss and the Zebra appears again, sitting on the log her grandmother had just vacated. He says, "Love the beard, Kevin," and is wearing a purple beard ("The Ballad of Badbeard").

He appears again in a later episode near the end of one of Candace's dreams (which was actually Perry's). The Zebra tells her, "I'm just as confused as you are, Kevin," and it's then seen that he is controlling a puppet of Baljeet, who is controlling puppets of Linda and Lawrence (perhaps alluding to the double dream). When Candace sees the Zebra, she isn't surprised to see him but a little shocked because she "[sees] him all the time" ("Phineas and Ferb Get Busted!").

During the Sci-Fi and Fantasy Convention, he is seen during Candace's "dream" (which is actually Phineas and Ferb's special effects), floating by Candace's bed saying, "I voted for you, Kevin," while holding a poster, with Candace's face on it in hues of red, blue, and white. Also, when she tells the boys to pack up their special effects equipment and get out, she tells them to take the zebra with them, Phineas asks "What zebra?" and Ferb shrugs, indicating that the Zebra may be a continuing hallucination of Candace's ("Nerds of a Feather").

In Candace's dream, he is seen in the swirling vortex at the beginning of the dream saying, "Oh, It gets much stranger, Kevin." ("Wizard of Odd"). He makes a brief appearance during the song, Carpe Diem ("Rollercoaster: The Musical!")

The Talking Zebra is seen thrice in the song Brand New Reality: First holding a newspaper that reads "Kevin wins Election" depicting a picture of Candace standing in front of podium while confetti rains down, in reference to the beginning of "Nerds of a Feather" when the Zebra says, "I voted for you, Kevin," then seen again two times at a dimension at the same time sitting in chairs (Phineas and Ferb the Movie: Across the 2nd Dimension).

The Zebra appears again during the song Going Deep into Your Mind, drinking tea inside a number seven in Candace's mind. When he sees Candace, he waves to her. ("Monster from the Id") 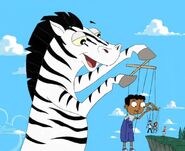