To free his People and Family from the Kree

Becomes one of Earth's superheroes and the mentor of Spider-Man

This is war. My hands are filthy from it, too. But we’re here now. You found my family, and this is just the beginning.
Talos is a Marvel Comics character that appears in Captain Marvel, played by Ben Mendelsohn. He is a kind and wise Skrull leader who flees from the evil forces of the Kree, managing to hide on Earth as Keller, the current director of S.H.I.E.L.D. While Captain Marvel at first pursues him, when she finds out the truth, she sets out to protect him and his people and give them a place where they can call home on behalf of her late-Kree mentor Mar-Vell.

He is also the one who confirms to Nick Fury about Flerken's nasty scratch, when a Flerken Goose comically scratched S.H.I.E.L.D. agent’s left eye.

Several years later, Talos decides to mentor Spider-Man while disguised as Nick Fury. Talos teaches Peter all he needs to be a hero and helps Peter defeat Mysterio and the Elementals.

Talos was created by Peter David and Gary Frank. 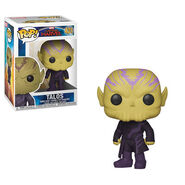 Retrieved from "https://disney.fandom.com/wiki/Talos?oldid=3869804"
Community content is available under CC-BY-SA unless otherwise noted.