Active
Tamara "Tam" Ryvora is a mechanic who appears in the animated series Star Wars Resistance.

She was once a racer back in the day until she lost her ship, and now works as a mechanic on the Colossus platform. Tough and hardworking, Tam Ryvora is an inventive and skilled technician who is not afraid to stand up for what she believes in. She has big dreams of one day becoming a pilot and racer once again.

Following the First Order's arrival on the Colossus, Tam was oblivious to their threat, being too young to have lived under the Empire. Following the revelation that Kazuda Xiono was a Resistance spy, Tam felt betrayed and was asked to disclose everything she knew about Kaz to First Order Security Bureau Agent Tierny. Tierny manipulated Tam to believe that Kaz and the Republic were evil, causing her to question her loyalties. When Tierny attempted to take Tam off Castilon, Kaz made an effort to regain her trust. However, his efforts were futile and Tam willingly went with Tierny, therefore committing herself to the First Order and became a TIE Pilot.

In the second season, Tam is tasked with assisting Tierny and Pyre in hunting down and killing Kaz, an assignment that she begrudgingly but willingly accepts. After leading the First Order to the Colossus, Tam is subconsciously (but visibly) relieved when her former friends manage to survive a First Order attack and escape. After her commanding officer, Lieutenant Galek, is killed by Torra's mother Venisa Doza, Tam is promoted to squadron commander.

Tam later becomes distressed upon witnessing Rucklin shoot down an unarmed Resistance recruitment ship. After watching a fleet of Resurgent-class Star Destroyers massacre the people of Aeos Prime as revenge for the Aeosians helping the members of the Colossus before, Tam finally decides to defect from the First Order. She sends a message to her friends on the Colossus to set up a meeting with them at the ocean of Castilon where the Colossus was originally docked, and Kaz notices that she is defecting.

As she is preparing to leave, Agent Tiernny notices something is wrong with her and orders Rucklin to assist her. Upon arriving at the ocean of Castilon, Rucklin recognizes Kaz and Jarek Yeager, but Tam knocks him out.

However, their shuttle gets captured by Commander Pyre and Agent Tierny. Kaz, Yeager and CB-23 manage to sneak out of the shuttle unnoticed, just before its self destruction. Later, when Yeager frees Tam from the stroomtroopers, Rucklin tells them that they lost because he told the enemy the Colossus' location, and Tam punches him for this, knocking him out again. While the final battle between the Colossus and the First Order is happening, CB-23 helps them by disabling the Star Destroyer's shields, which allows Tam and her friends to escape while the Aces and Jade Squadron destroy the enemy's ship.

They successfully escape, but at the cost of damaging CB-23 after she saved Kaz from Commander Pyre (although Kaz manages to kill Pyre in the process). She gets a heartfelt homecoming and is forgiven for her mistakes, so she joins her friends as they celebrate at Aunt Z' Tavern. 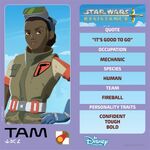