Disney Wiki
Register
Don't have an account?
Sign In
Advertisement
in: Characters, Once Upon a Time characters, Villains,
and 6 more

“Magic does not belong in this world. It's unholy. We're here to cleanse this land of it.”
―Tamara to Regina[src]

Tamara is an antagonist who appears in the second season of the ABC fantasy show Once Upon a Time. Tamara is a human woman who believes that magic is unholy, and should be abolished. She attempted to kill both the Dragon, Pinocchio, and Neal Cassidy; however all three managed to survive.

At some point in her life, Tamara grew to hate all magic beings on Earth.

Before she became engaged to Neal Cassidy (Baelfire), Tamara tracked down and murdered many magical beings. In Hong Kong, Tamara is in the waiting room of the Dragon when her turn comes to see him. When she stands up, she drops her phone, and August Booth, who's also there to see the Dragon, hands it back to her. Tamara lies and tells the Dragon that she has a malicious form of cancer, and he hands her a mystical potion. Tamara later revisits the Dragon and tells him that the substance of the potion matches no element found on Earth and she thinks that it's magic. When the Dragon begins to reveal himself before her, Tamara takes out an anti-magic device and tries to kill him. However, through mysterious means, the Dragon manages to survive. 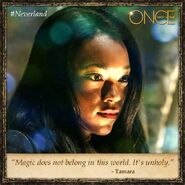