Mouseton
Tanglefoot was Mickey Mouse's horse, who was first seen in the "Mickey Mouse and his Horse Tanglefoot" storyline in the Mickey Mouse daily comic strip, which ran from June 12 to October 7, 1933.

Shortly after Mickey Mouse's adventure as a Mail Pilot when he helped the government's secret service find and save missing pilots and their plane, and to bring the criminals Sylvester Shyster and Pete to justice, he was awarded $5000 (which was a great deal of money in 1933). Mickey then took the money and his girlfriend, Minnie Mouse, to the local carnival. While there, Mickey and Minnie discussed how they were going to invest the reward money. Mickey decided it would be a great source of revenue to invest in a champion racehorse. Two unnamed crooked gamblers overheard the conversation, bought a rickety old nag named Tanglefoot from the "glue factory" and then convinced Mickey he was a thoroughbred racehorse. Gullible Mickey paid the asking price of $5000 to the crooks and soon Mickey entered Tanglefoot in a race where the judges gave him 1000 to 1 odds of winning. True to his name, the shabby old nag stumbled all over himself and lost the race. Mickey, still not realising Tanglefoot was no longer a fit horse, proceeded to train and believe in his new friend. Once more, Mickey entered Tanglefoot into a horse race, and once more the steed became entangled in his own reigns. However, Tanglefoot, strengthened by Mickey's care and belief in him, got up on his unencumbered hind legs and ran the rest of the race as a biped. He soon passed all of the other horses and emerged as the qualified winner. Tanglefoot was used in a few more of Gottfredson's tales but, other than appearing in some merchandise, Tanglefoot hasn't been seen in USA comics for decades. He may have been used by writers in some foreign Mickey mouse comics, however.

Carl Barks, when he was working as a scriptwriter and storyboarder at the Disney studio, worked on a Mickey Mouse cartoon which was to feature Tanglefoot — it would have had Mickey as a riding policeman chasing Pete on horseback through the wilderness, with Mickey as the hero and Tanglefoot as the comedy relief. However, the cartoon never went beyond the storyboarding stage. Tanglefoot was notably also featured on the poster for Mickey's Polo Team (despite that he didn't appear in it), but he remains a comics-only character to this day. 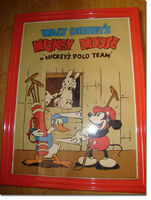 Tanglefoot on the poster for Mickey's Polo Team