“Fish aren't meant to be in a box kid, it does things to you.”
―Gill

The Tank Gang are a group of fish that live in a fish tank at Philip Sherman's dentist office in Disney/Pixar's 2003 animated film, Finding Nemo.

Peach is a pink-red starfish who can apparently read human. She is usually seen attached to the side of the tank, watching the dentist do his dental work on different patients. She announces what is going on to the rest of the Tank Gang. However, whenever Peach speaks, her voice is muffled against the glass (which is a running gag) and one of the other fish would say, "Can't hear you, Peach." She then unsticks herself from the glass so the gang can hear her clearly.

Peach was purchased by the dentist on eBay and was voiced by Allison Janney. 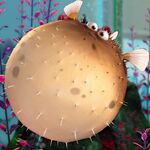 Bloat is a brownish-gold porcupine pufferfish with brown eyes who lives in Philip Sherman's office tank. When he gets scared or agitated, he bloats up, and then one of the other fish has to deflate him. He likes to be as disgusting as possible.

Bloat was bought by the dentist from "Bob's Fish Mart" and was voiced by Brad Garrett. 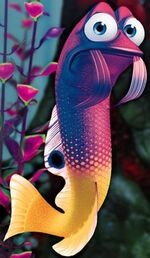 Gurgle is a purple gramma fish with a yellow tail who resides in the dentist's office fish tank. He is germaphobic and incredibly pessimistic, doubting the possibility of Gill's plans working and getting increasingly nervous and frustrated when the plan to break the tank filter goes into motion. He often argues with Bloat.

Gurgle was bought by the dentist from "Pet Palace" and was voiced by Austin Pendleton. 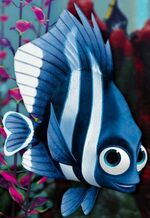 Deb is a blue and white striped humbug damselfish with blue eyes who lives in the dentist's fish tank in Sydney, Australia. She seems delusional, as she thinks her reflection is her sister named Flo, who may or may not exist.

Deb was received through a mail order and was voiced by Vicki Lewis. 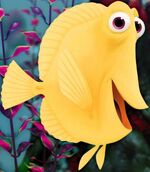 Bubbles is a yellow tang fish with violet eyes. He has a peculiar obsession over the bubbles that come out of a small treasure chest decoration in the fish tank; hence his name.

Bubbles was bought by the dentist from a pet store called "Fish-O-Rama" and was voiced by Stephen Root.

Jacques is a French-accented red and white cleaner shrimp with blue eyes. He "decontaminates" new fish to the tank in the dentist's office. He also controls the "Ring of Fire" on Mount Wannahockaloogie, as seen when Nemo was given a royal welcome by the Tank Gang, who dubbed him "Sharkbait" after he successfully swam through the "Ring of Fire."

Jacques was voiced by the late Joe Ranft in Finding Nemo, and by his brother Jerome in Finding Dory.

On the night after Nemo was dumped into the fish tank, Gill, during an initiation ceremony atop Mt. Wannahockaloogie, tells Nemo (who was given the nickname "Sharkbait") that the Tank Gang was actually trying to escape the fish tank they have been contained in after Dr. Sherman's niece Darla accidentally killed a former member named Chuckles by shaking his bag on her birthday. He tells Nemo that the only way for the fish to escape the tank is to have Nemo jam the aquarium filter's motor with a pebble (as he is the only fish that is small enough to enter and exit the said filter), causing the entire tank to be completely covered with algae, and therefore forcing the dentist to clean the entire tank, at which he puts all the fish into plastic bags, which the fish use to roll out an open window overlooking a street next to the harbor and allowing them to escape.

The next day, the Tank Gang makes their first attempt to jam the filter, but the pebble is unfortunately not jammed hard enough. And when the filter starts up again, the Tank Gang had to pull Nemo out of the filter with a decorative plant to prevent him from being shredded alive. Gill then feels sorry for almost putting Nemo's life at risk because he was too excited about going back into the ocean. But after hearing Nigel the pelican tell him that his father Marlin and his new friend Dory are coming to his rescue, Nemo decides to jam the filter again, but he finally succeeds this time. Unfortunately, the fish tank immediately gets covered up with algae, with the filter completely damaged by the fish.

Unfortunately for them, the dentist replaces the old filter with a new one called the AquaScum 2003, which is equipped with a laser scanner that examines the tank every five minutes, a computerized voice telling the water's temperature and pH level, and no moving parts for the fish to interfere with, while they were sleeping on the day Darla was supposed to arrive. The Tank Gang reacts to the AquaScum with anger. But after a brief "false alarm" as a result of the fish mistaking a young boy and his mother for Darla, the dentist scoops Nemo out of the tank with a net, causing them to react with shock and get Nemo out by weighing down the net. But the dentist still gets Nemo out anyway, but this time with a plastic bag. Nemo attempts to roll the bag out the window, but the dentist stops him by putting him in a box, just as Darla finally arrives for real.

During Darla's checkup, Nemo attempts to play dead to trick the dentist into flushing him down the toilet, but he attempts to throw Nemo in the trash instead when Nigel, carrying Marlin and Dory, flies into the dentist office and attacks the dentist, only to be shooed out (and Marlin thinking that Nemo is dead). Darla then picks up the bag containing Nemo and begins to shake it. But upon realizing that such will kill him, Gill finally has enough and launches himself out of the tank using Mt. Wannahockaloogie and onto Darla's head, causing her to drop the bag onto a dental mirror and therefore popping it open, and Gill immediately catapults Nemo into the dentist's spit sink before finally being put back into the tank and celebrating with the rest of the Tank Gang as Darla gets her face harshly sprayed by the spit sink when she breaks it.

At the end of the film, the AquaScum 2003 breaks despite having a maintenance-free lifetime guarantee, and the tank gets very filthy again. This time, the dentist is forced to put the gang plastic bags to clean the tank by himself, and they finally escape from the office in the plastic bags, make their way across the street, and jump into the ocean waters, although they remain floating in the water with no idea how to get out of the bags. It is unknown what happens to them after this, although the ending credits suggest that they eventually escape.

The Tank Gang only appear in the post-credits scene of Finding Dory, during which they arrive just outside the Marine Life Institute still inside their plastic bags now covered with algae. They are then scooped up by the institute volunteers.