To bully his brother Honker

His parents Herb and Binkie

"I'll get you, Honker!"
Tank Muddlefoot is a character in Darkwing Duck. He is Honker's older brother and Herb and Binkie's son.

Tank Muddlefoot is the eldest son of Herb and Binkie Muddlefoot. Tank is a bully who often makes life difficult for his neighbor Drake Mallard and his younger brother Honker. In the Negaverse, Tank is well-mannered and smart like Honker.

Tank only appears in the first ABC Saturday morning season and during the Fall run of the syndicated series (contrary to what many sources claim, the syndicated run of Darkwing Duck ran staggered from September of 1991 to May of 1992, with Fall, Winter, and Spring batches of episodes). He appeared in 14 episodes before producer Tad Stones - finding the character redundant - dropped him from the show. The last episode he appears in is "It's a Wonderful Leaf", though he later had a cameo in the comic book in the "Crisis on Infinite Darkwings" arc. 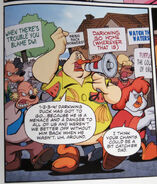 Tank gets stuck in the chimney.
Add a photo to this gallery
Retrieved from "https://disney.fandom.com/wiki/Tank_Muddlefoot?oldid=3601979"
Community content is available under CC-BY-SA unless otherwise noted.