Her family, spending time with Raven

Being scammed by Cory, her kids getting into trouble, her kids fighting

Tanya Baxter is the wife of Victor Baxter and mother of Cory and Raven Baxter in That's So Raven. She is a firm, but fun and caring mother who, despite the antics of her children, is always there for them. She halted her studies to raise her family, but decided once the children were older to continue studying law. Before that, she briefly worked as Raven's English teacher at the request of Raven's school principal. She has a very competitive nature to her personality. According to some episodes in the first season, Raven inherited her psychic abilities from her mom's side of the family, and that Tanya's mom, Viv, is also psychic (the powers skipped Tanya's generation). In season 4, Tanya is not present, saying that she went off to England to attend law school. She does not appear on Cory in the House. Although she doesn't appear in Raven's Home, she is mentioned in the episode "Dancing Tween", when a delirious and half asleep Raven asks her mother not to take her to school. She is also mentioned when Booker tells Raven about Tanya's stories of Raven driving them crazy. 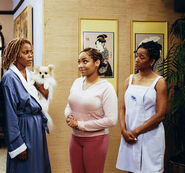