Tapestry of Nations was a parade at the Epcot theme park at Walt Disney World Resort, Florida, that ran around the World Showcase Lagoon from 1999 to 2001, after which it was rethemed as Tapestry of Dreams. The parade had a unity and world peace theme and featured a variety of large puppets and massive rotating drum units. The puppets were designed by Michael Curry, who also designed the puppets for The Lion King on Broadway and a variety of Disney theme park shows. The leader of the parade was the Sage of Time, who was represented as a stilt walker in an elaborate costume featuring alchemy symbols, gold trim on a white robe, a staff, and a headpeace resembling a sun with a face.

March 1, 2003
In 2001, the parade became Tapestry of Dreams. Wishes from children around the world were heard throughout the parade's soundtrack. The middle of the parade had a tribute to Walt Disney, "...the greatest and most wonderful dreamer of all!". In this version, the Sage of Time was replaced with the Dreamseekers, a trio of elf like characters that would open and close the parade and using elaborately decorated butterfly nets, collect Dreamtale coins that children would receive at the Epcot Kidcot stations. These three included:

The Dreamseekers travelled with a new float added to the parade known as a Dreamcatcher, which Leonardo drove. Covered with wings, dreamcatchers and chimes, this became a visual element to compensate for the lack of a stiltwalking host like the Sage.

Additionally, the puppets were augmented with the additions of chimes and cymbals in an effort to add an additional layer to the audio performances. The Millennium Drums received additional propping with streamers added to the drummer balconies.

It ran nightly, although in a reduced fashion compared to Tapestry of Nations and was canceled in March 2003 as a result of its declining popularity, crowd control issues, and safety concerns for the puppeteers.

The original Tapestry of Nations ran with several different audio tracks over it's original run. The first few months, the Sage of Time had a more stilted and monotone voice and no "Legend intro". By December, a new voice actor recorded a gentler warmer voice for the Sage and the Sage of Time legend was added to the show's intro. In 2001 after the Millennium Celebration ended, the Sage's narration was rewritten to remove Millennium references in favor of new dialogue talking about human dreams. This would provide the inspirational point for the Tapestry of Dreams re-theme.

For Super Bowl XXXIV, the Walt Disney Company would produce a Tapestry of Nations-based Half-time show featuring a gigantic Sage of Time backdrop, puppets from the show, a full choir, narration by Edward James Olmos and performances by Christina Aguilera, Enrique Iglesias, Phil Collins and Toni Braxton. Tapestry of Dreams would also have a presence in the 2001 Philadelphia Thanksgiving Day Parade as part of a broader 100 Years of Magic unit.

Years after its end, Tapestry lived on through IllumiNations: Reflections of Earth, with footage from the original parade being part of the Globe projections and the score still being part of Epcot's exit music. The parade's music has also appeared in special Epcot Anniversary tags for Illuminations and in Epcot Forever. After the parade ended, some Disk Man puppets were sent to Tokyo DisneySea to take part in their second anniversary parade Mickey's Fantastic Caravan and other puppets would make occasional appearances at private parties and even the New Year's 2007 festivities at Epcot, though they have not been seen active since then. 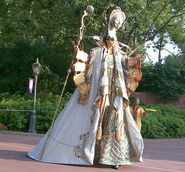 The Sage of Time

A Millennium Drum decorated for Tapestry of Dreams

Leonardo Columbus, one of the Dreamseekers 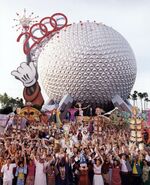