Ishimura, Japan
Taro is a minor character from the Disney animated series, Gargoyles. He is a businessman residing in Ishimura, Japan, who is in some way affiliated with Bushido Concepts and has a history with Clan Ishimura.

Taro was a poor student of the Ishimura Clan. After some time, he grew tired of his provincial life, so he abandoned the teachings of the clan and went into business.

At some point, he decided to build a theme park whose theme was gargoyles. To populate his park with the creatures he sought to exploit, he tricked Yama into plotting to move his clan to the amusement park. The night that Taro decided to move the gargoyles to his amusement park was when the Avalon Travelers appeared, so Taro decided to kidnap Goliath, Angela, and Bronx.

The gargoyles rebelled against Taro, defeating him, and with the help of Elisa Maza and the town's constable, Taro ended up dangling from a gigantic animatronic gargoyle in the theme park and was embarrassed in front of a crowd of reporters, looking like a fool. ("Bushido") 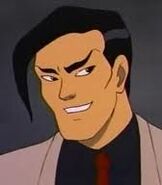 Retrieved from "https://disney.fandom.com/wiki/Taro?oldid=3792333"
Community content is available under CC-BY-SA unless otherwise noted.