Tarzan's Treehouse is a walk through attraction at Disneyland and Hong Kong Disneyland. It is styled after the treehouse in the 1999 film Tarzan.

In contrast to how the Swiss Family Treehouse was designed as a tour through an empty house, the Tarzan Treehouses use diorama figures to loosely retell the story of the film, which is "narrated" through a series of Jane's journals.

In February 1999, Disneyland closed its version of the Swiss Family Treehouse, and Imagineers re-themed the attraction to coincide with the soon to be released Tarzan film. The giant artificial tree received a comprehensive makeover, including 6,000 replacement vinyl leaves, a suspension bridge entrance from a new neighboring tree, and a variety of hands-on interactive features. The tree is currently 70 feet tall and weighs 150 pounds. On June 23, 1999, Tarzan’s Treehouse began welcoming park guests, just as Disney’s animated Tarzan premiered in movie theaters. Tributes to the Swiss Family Treehouse are featured in the attraction including the "Mind Thy Head" sign and the "Swisskapolka", which can be heard playing on a vintage gramophone.

On September 3, 2021, the attraction closed for an unexpected refurbishment. It was later announced in April 2022 that the Tarzan theme would be removed and rethemed to Disney's animated film, Encanto.

When Hong Kong Disneyland opened on September 12, 2005, it included Tarzan’s Treehouse built on Tarzan’s Island. Rafts are used to ferry passengers to and from the island, which is encircled by the Rivers of Adventure. This is a similar arrangement to Disneyland's Tom Sawyer Island. 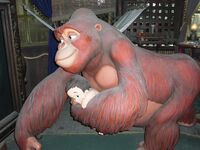 Kala with baby Tarzan in the Treehouse 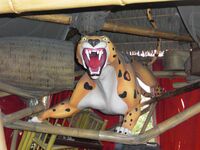 Sabor in the Treehouse

Jane Porter in the Treehouse 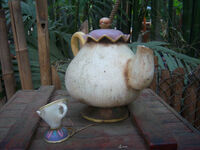