Goofy's Summer Camp
For the First Time in Forever: A Frozen Sing-Along Celebration

Tarzan: Call of the Jungle
人猿泰山：丛林的呼唤

Tarzan: The Encounter was a musical show based on the film Tarzan that took place in "The Chaparral Theater" at Disneyland Park (Paris), and was in the "Storyhouse Stage" at Shanghai Disneyland as Tarzan: Call of the Jungle.

The entire stage was transformed into a wild, exciting jungle, full of hidden secrets and fun effects. Swinging vines appear from nowhere, leaves rustle on cue, Jane Porter's tent pops up from nothing and swirling smoke fills this mysterious unexplored landscape. The large, talented cast, intricate set and pounding musical score make sure the guests are totally immersed in the magic of the legend.

Shanghai Disneyland was also features an almost identical attraction, named simply Tarzan: Call of the Jungle. It is an original production starring Tarzan and his friends, included as part of the entertainment. It's a high-energy, musical retelling of the boy who was raised by apes to become King of the Jungle. Featuring the iconic score from the animated film, the stage show is a fusion of theatrics, Chinese acrobatics, and a rock concert.

On December 22, 2016, a female performer (as Jane Porter) fell approximately 4-5 metres during Tarzan: Call of the Jungle. The show stopped and the audience was asked to leave. The report said the performer was okay and had no life-threatening injuries.

Concept Art for Tarzan: Call of the Jungle at Shanghai Disneyland
Add a photo to this gallery 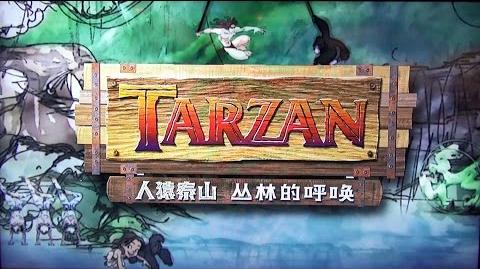 Retrieved from "https://disney.fandom.com/wiki/Tarzan:_The_Encounter?oldid=3708217"
Community content is available under CC-BY-SA unless otherwise noted.