Anyone who insults his name, Yondu Udonta

Groot (formerly)
Taserface is a Marvel Comics character who appears as the tertiary antagonist in Guardians of the Galaxy Vol. 2 (after Ego and Ayesha). He is played by Chris Sullivan.

Taserface is an advance scout for the Kree, who resigned from his position and took leadership of the Ravagers away from Yondu. His name is a cheeky reference to his cybernetic implants, which give him superhuman strength, superhuman speed, invulnerability, and the ability to shoots energy blasts from his arms.

Taserface is brutal, primitive, and aggressive, ideal traits to lead the Ravagers. He is also sadistic, reveling in the pain of Baby Groot, but his largest pet peeve is hearing other characters insult his name, which he believes is cool. 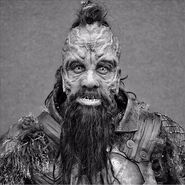