Black Widow
Crimson Widow
Red Guardian
Taskmaster is a Marvel Comics villain who can read and copy his enemies' moves, thanks to his "photographic reflexes".

Taskmaster is hired by Doctor Octopus to find if one of the Midtown High students is Spider-Man. He infiltrated in the school with the alias of Coach Yaeger and tested the students to see which one's athletic abilities qualified to be Spider-Man. The three best fits were Danny Rand, Flash Thompson, and Harry Osborn, so he told them to come on Saturday.

On Saturday, Taskmaster faced the three subjects. Danny fought off him, but Taskmaster copied his moves and defeated the young man. When Taskmaster's options were reduced to Flash Thompson, White Tiger, and the actual Spider-Man faced him. Taskmaster offered Spider-Man to work with him instead of giving him to his employer, but the wall-crawler refused. Spider-Man and Tiger fought Taskmaster in the dark, exchanging equipments so he confused them and couldn't read their moves. He was unmasked as Yaeger, but it turned out to also be a mask and Taskmaster escaped. He told Octopus he didn't find Spider-Man, as he had his own plans for the web-slinger.

Taskmaster appears, portrayed again, by Clancy Brown. He appears in the episodes "Show Your Work" and  "The Night Has Wings".

Taskmaster is set to appear in the movie. 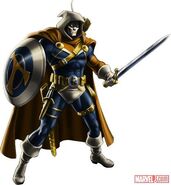 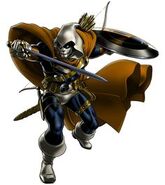 Retrieved from "https://disney.fandom.com/wiki/Taskmaster?oldid=3857921"
Community content is available under CC-BY-SA unless otherwise noted.