Disney Wiki
Register
Don't have an account?
Sign In
Advertisement
in: Characters, The Replacements characters, Heroines,
and 13 more

Japan (originally)
Pleasant Hills (residence)
Tasumi[3] is a character on The Replacements. She is Riley Daring's best friend, who is of Japanese descent. For about the first half of the show's run, she wears a metal suit similar to that of Super Sentai. She claims her family is part of a crime-fighting team. She also has a list of people she hates. Riley is either on or off it, depending on the state of their friendship.

In the episode "Best Friends For-Never?", it is revealed that Riley first met Tasumi in a broom closet when she was new at school and tried to get to homeroom but got lost. Tasumi was hiding in the broom closet because she split her suit and was embarrassed, but Riley fixed it with the duct tape her dad made her carry.

In the episode "Tasumi Unmasked", it is revealed that Tasumi is in fact a cute and impossible beautiful Japanese pop star. She moved to Pleasant Hills in order to escape the constant adoration of her fans and live a peaceful life, as Pleasant Hills was voted as the least culturally aware town in the world and she believed that nobody there would recognize her. However, in order to make sure that nobody recognized her, she wore a costume from a popular anime and used details from that anime in order to get a new history. She often referred to things such as fighting giant monsters and so forth, but in reality, she had never done anything of that sort. When her fans found out about this, she moved back to Japan for two weeks to record a new album until Riley replaced her band members with orangutans and she got kicked out by her new orangutan members because she has thumbs (even though orangutans also have thumbs). She came back to Pleasant Hills with Riley and no longer wears her suit, dumping it in the garbage. (Despite that, though, she still has the suit with her in the series finale, "Irreplaceable").

In "The Truth Hurts", Tasumi is shown to have a crush on Jacobo Jacobo, when she passes a note in the classroom asking him if he likes her; to her dismay, he checks "maybe". In the series finale, though, it is revealed that Tasumi and Jacobo are now actually dating, to the surprise of Riley and Todd. Tasumi becomes quite protective of Jacobo and her relationship with him, taking offense at his crush on Agent K and attacking anyone who threatens to harm him.

For the first season and half of season 2, Tasumi wore her pink metal suit and blue wig, but in late season 2, she now wears a light green collared shirt with a turquoise vest, a blue skirt with green lines, and black shoes. She also wears a green bracelet on her left arm. This outfit was also her original pop star outfit before she moved to America.

In "Halloween Spirits", she wore a blue version of her armor, which she claimed was the same as her brother Roku.

In "Late Night with Todd & Riley", she is seen wearing a blue tank top with black lines and a black cat head in the middle and blue pajamas with cat head patterns. She also wore her normal helmet and gloves. 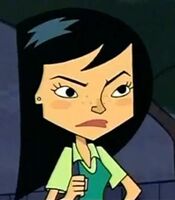 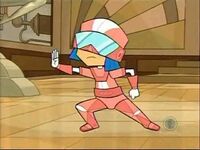 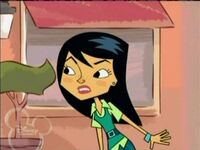 Tasumi in her Christmas outfit